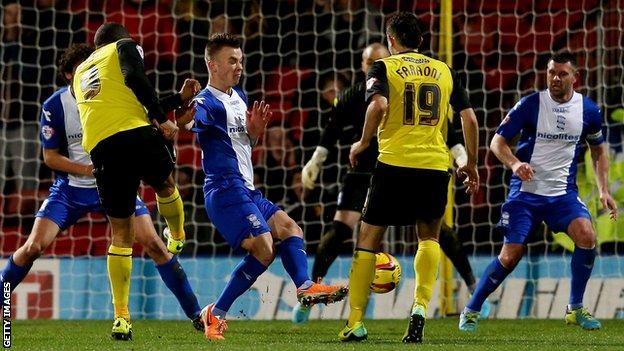 Troy Deeney's 13th goal of the season helped Watford to a narrow victory over Birmingham at Vicarage Road.

The striker, a boyhood Blues fan, scored the winner in the first half after being set up by Fernando Forestieri.

The Hornets shaded the contest - having a strong penalty appeal turned down in the first half and seeing a Forestieri header cleared off the line.

Birmingham went closest when Paul Caddis hit a post from 30 yards out.

Victory sees Giuseppe Sannino's 13th-placed side move to within nine points of the play-off places with a game in hand on sixth-placed Reading, while Birmingham are 18th.

The reverse fixture at St Andrew's also finished 1-0, with Troy Deeney scoring the winner, on the opening day of the season.

Lee Clark's men came close to taking a surprise lead in the seventh minute when Chris Burke's cross almost crept under the crossbar before, at the other end, Federico Macheda appeared to handle Daniel Tozser's corner in the box.

Caddis rattled an upright with a rasping long-range shot before Watford took the lead - Deeney's deflected shot at the second attempt beating Darren Randolph after good work from Forestieri.

Birmingham narrowly had the better of the second half but struggled to truly test Manuel Almunia.

With the visitors pressing forward, Forestieri's header was cleared off the line from another Tozser corner before the Blues were denied a late leveller when Aaron Martin headed a long free-kick forward narrowly wide.

"I'm not watching the table at the moment. What I am watching is match after match.

"We have to start to think about the next game against Middlesbrough, this game belongs to the past.

"I think in the first half we were the better side on the pitch. We conceded one shot on goal when they hit the bar but I think, I'm not blaming anybody, but I think in the box for us there were a couple of times when maybe we deserved to have something. "

"We deserved something from the game without a shadow of a doubt. Our second-half performance was very, very good.

"First half I had too many regrets. I know we hit the post a couple of times from long-range efforts but we didn't put them under enough pressure.

"We had some great set-play deliveries from the best player on the pitch by a million miles, Emyr Huws, the stand-out performer and we had some terrific situations from his set-plays but we played too much tippy-tappy football at the back and not getting the ball forward and playing in Watford's half."