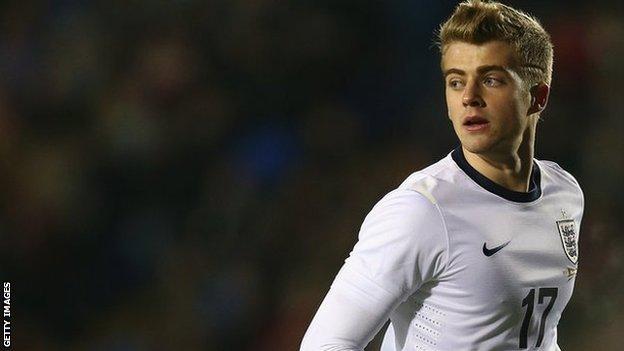 Both sides had chances in an even first half. Jeff Hendrick fired an effort over for the Rams, while a header from Rovers' Rudy Gestede went over the top.

The hosts led within a minute of the restart, though, with Gestede stooping to head home a Jordan Rhodes cross.

But Bamford levelled with a classy curled strike seven minutes from time.

The Football League's player of the month for December followed his fine curling winner against Brighton last Saturday with an even better finish.

Derby remain the highest scorers in the Championship this season with 51 goals and also have the best away record, winning eight and drawing three of their 13 games.

This time, Chelsea's on-loan England Under-21 forward got possession 25 yards from goal and bent a superb low shot past goalkeeper Paul Robinson and into the bottom corner.

It earned the Rams a deserved draw from an entertaining game at Ewood Park.

Derby had dominated the early possession but Rovers went closest to opening the scoring when Gestede's header was well saved by keeper Lee Grant.

The visitors responded and a mazy Simon Dawkins run ended with the midfielder teeing up a good chance that Hendrick wasted.

Gestede then missed a decent headed opportunity but made amends when he claimed his third goal in four games with a low close-range header.

The Rams looked like forcing an equaliser, but Craig Forsyth blazed a shot over after great work by Craig Bryson and Will Hughes was desperately unlucky with a clever lobbed effort that beat Robinson and went over after hitting the bar.

Dawkins then went close before Bamford showed his quality.

Todd Kane had a late penalty claim and also had the chance to snatch the points for Blackburn but flashed a shot wide, while Bamford also shot over for the visitors.

The Rams are in fourth place in the Championship table, just four points off the automatic promotion places, while Rovers are ninth, three points off the play-off spots.

"We did have a penalty in the second half again. It's the second week running I'm talking about penalties that should or shouldn't be given against us, and at the moment we aren't getting them. Perhaps it's because we're too young and nice on the pitch.

"The rules of the game do not state that when you have a penalty you have to go down for it. Unfortunately the referee doesn't see it like that. If it's outside the box, guess what, it's a free-kick.

"If it's inside the box, he doesn't give it because he's not gone down and it's getting a bit tiring to be honest.

"Once they scored to go 1-1, the momentum was with them. Full credit to our boys because they stuck at it and didn't give in.

"It could have been easy for us to have gone and lost that but they didn't, they stuck at it. That is the positive. It's a decent point."

"Patrick Bamford's come in and his temperament is fantastic. It's as if he's been here for years. I think he's shown in the two games the qualities he's got. He's a natural goalscorer and the goal, there was no backlift. It was just hit early with pace, power. We've got a real asset on our hands.

"He's got a long way to go and a lot to learn but he's a sensible and very intelligent boy and he's making the right steps. He wants to play every game but he's being patient and showing everybody what he can do when he comes on. We've got three games this week and he'll definitely start one.

"We're disappointed not to have won the game. It was scrappy in the first half, nothing in the game, with half-chances at both ends. After conceding the goal, the response of the team was great. We got the ball down and played.

"We were positive with our substitutions and it's great when you've got people who can come off the bench and make an impact and with 20 minutes to go I thought we were in control of the game.

"It was only a matter of time and would have been an injustice if we hadn't have scored at least one, which we did."