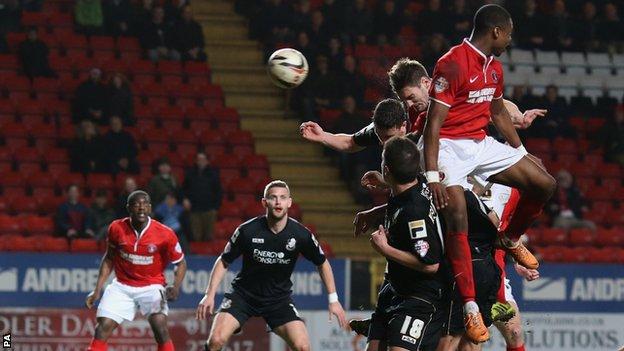 Dorian Dervite's late header gave Jose Riga his first win as Charlton boss as they moved out of the Championship's bottom three.

Dervite rose to head in from a corner as the Addicks secured only a second victory of 2014.

Johnnie Jackson hit the post in the first half for Charlton, who had drawn Riga's first two games 0-0.

Jackson and Simon Church were both denied by Bournemouth keeper Lee Camp after the break, before Dervite struck.

Steve Cook and Harry Arter both had first-half shots saved by Charlton keeper Ben Hamer as Bournemouth sought to extend a run of four matches unbeaten.

In between those two chances, Cherries striker Lewis Grabban blasted over after Ian Harte's low corner had unlocked the home defence.

Camp held Danny Green's low shot at his near post at the second attempt, before Dervite headed just wide from a Jackson corner.

Dorian Dervite's winner for Charlton was the first goal Eddie Howe's Bournemouth side had conceded in five matches - since a 1-0 defeat at Derby on 22 February.

It took the home side 25 minutes to register their first genuine effort on goal, Danny Green firing a low shot which was well handled by Lee Camp at his near post.

After the break, Charlton midfielder Diego Poyet's half-volley brushed the top of the net, and Jordan Cousins miscued a great chance after being set up by Jonathan Obika - signed on loan from Tottenham this week.

Bournemouth striker Yann Kermorgant - signed from Charlton in January - could not make an impact against his former club after coming on as a substitute just before the hour mark, and it was the hosts who finished the stronger.

Camp made a brilliant double save to deny first Church, who was through one-on-one, and then Jackson by scooping away the loose ball.

But there was nothing the goalkeeper could do as Dervite rose to head in Jackson's corner right at the end.

Charlton head coach Jose Riga: "Dorian has a good reading of the game. He understands it very well and passes it well.

"The only point with him he is sometimes he is too introverted. He needs to be more like the boss."

Bournemouth manager Eddie Howe: "We didn't score when we were on top, then Charlton rolled their sleeves up and dug in. We gave away too many free-kicks and one of those cost us at the end.

"I think we defended OK, but we didn't look like scoring and that's a concern."