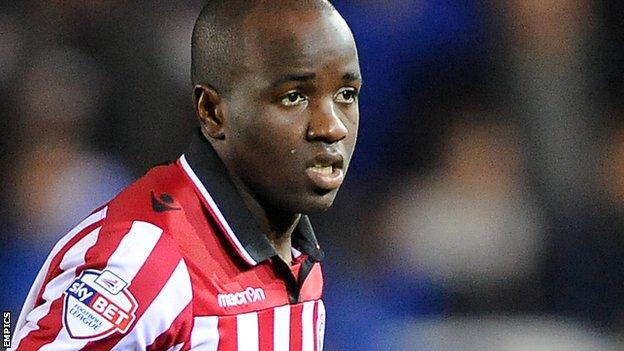 He then finished off a swift counter-attack before nodding in a Craig Westcarr cross to complete his treble.

Andy Butler headed in and Westcarr latched onto a long ball for 5-0 before Callum McGregor's consolation.

On his 127th club appearance, Walsall's Febian Brandy scored the first hat-trick of his career

The midfielder, who for a second time on Friday, found the net for the 13th time this season with a free-kick.

But it did little to lift the Meadow Lane crowd on an extremely disappointing day for Shaun Derry's side, who are only being kept out of League One's relegation zone by a single point.

Victory for the Saddlers, who scored five goals in a match for the first time since beating Hartlepool 5-2 in March 2011, saw Dean Smith's men move above Peterborough into sixth position.

"It's unacceptable. As a group of guys we're hurting and we've had a chat and now I'm looking for a reaction.

"We've come a long way in a short space of time but this does feel like a huge backwards step.

"Ultimately we get judged on what we do on a Saturday afternoon. I'm not going to stand here and make excuses and I deserve the flak as much as anybody else."

Shots on Target
Home7
Away13