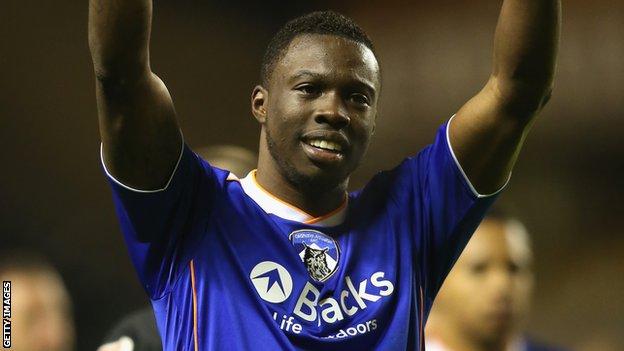 Oldham staged a stunning comeback to beat Peterborough in a nine-goal thriller in League One.

But after the break Gary Harkins and David Worrall replied for the Latics, before Nicky Ajose added Posh's fourth.

Posh were on the right side of a goal-fest on Tuesday, but after coasting into the break with a three-goal cushion they were unprepared for the never-say-die response of Lee Johnson's men.

The memorable result hoisted the Latics four points clear of the relegation zone and saw Posh drop out of the play-off places on goal difference.

Posh had struck as early as the fifth minute when Assombalonga nodded in Ajose's cross and only looked to get stronger as Rowe headed in a corner and Tomlin applied a first-time finish to Danny Swanson's pass.

But the Latics were ruthless after the break, with the instrumental Harkins turning in a corner and Worrall finishing superbly from 20 yards.

The home side looked to have undone their good work when Ajose collected a wayward Oldham throw-in to tap into an empty net.

But Wesolowski fired in against his former club before Tomlin received his third red card of the season when stopping James Tarkowski's goal-bound effort with his hand.

Harkins converted the subsequent penalty before Kusunga was on hand in a crowded six-yard box to notch his first league goal for the Latics and secure a remarkable victory in the dying moments.

"What a fantastic day for the fans. We were woeful in the first half and at half-time we hit rock bottom and fair play to the lads, I've got to say what great character and attitude and heart to produce that second-half display and score five goals.

"I think sometimes you've got to make bold decisions. You could say I got it wrong if you like with my starting 11, that would be fair to say.

"Sometimes you've just got to hold your hands up and say alright it hasn't worked. Tactically I don't think we were at it in the first half hour.

"This day was about an unbelievable game and unbelievable entertainment and that's why we all love football because stuff like that can happen."