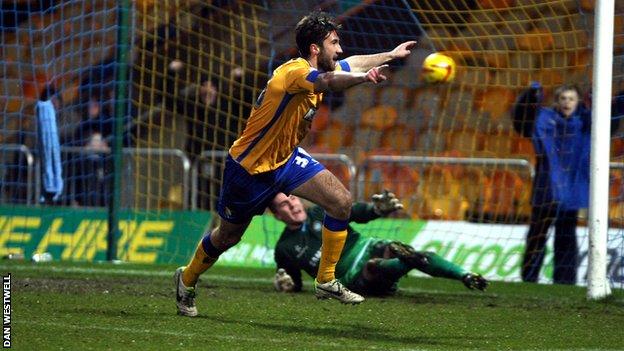 Mansfield fought back from two goals down to earn a point and deny lowly Wycombe an important victory.

But Lee Stevenson slotted under Matt Ingram, who had made a number of fine saves, to halve the deficit.

Substitute Ollie Palmer then headed the equaliser into an empty net after Ingram had tipped Chris Clements' initial effort onto the bar.

Mansfield, in 17th position with 31 points, have not won in 11 home games, while Wycombe, two points and two places further back, have just one win in 14 outings.

"That was probably the most one-sided game that I have never won.

"I thought, from start to finish, we played on the front foot and created some great chances. No one would really have questioned it if we had come in two or three goals up at half-time.

"The overall pressure in the end has told, but you have to pay credit to their goalkeeper, who made some fantastic saves."

"Stuart Lewis has been working so hard on his finishing and that paid dividends today. It was a fantastic finish from him.

"It's all looking good for the future for us. I'm really excited to get to Tuesday now and our home game against Portsmouth. I believe we can take all three points there."