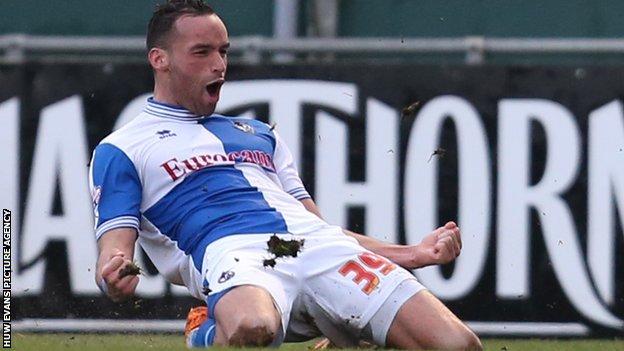 Newport County are still seeking their first win of 2014 after defeat by struggling Bristol Rovers in the Severnside derby.

Eliot Richards doubled the home side's advantage four minutes after the re-start but Rene Howe pulled a goal back.

"It's important because we talked prior to the game about the two home games and it will only become good if we can create a similar situation on Tuesday against Accrington.

"The Rovers people will go home happy because they've won the game but I think both set of player deserve credit for putting on as strong a game as they could in such shocking conditions."

"A lot of things didn't go for us today. That's not taking it away from Bristol Rovers but I certainly didn't think there was too much between the two sides.

"We're disappointed with the goals we gave away. A couple of players have spoken and held their hands up and know they can do better.

"The timings of the goals were crucial for them and put us on the back foot and made it difficult. The ball hasn't fallen for us and it has for them."