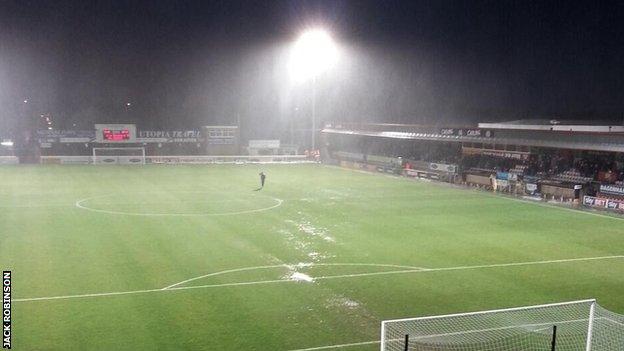 Dagenham came back from three goals down in atrocious conditions to rescue a point against leaders Scunthorpe.

Referee Darren Bond took the sides off with six minutes left and the visitors 3-2 up when a lightning storm struck.

But the game continued 10 minutes later and debutant Luke Norris rolled the ball in to equalise.

Earlier, goals from Sam Winnall, Deon Burton and Paul Hayes put the Iron in front before Abu Ogogo and Chris Dixon brought the Daggers back into it.

Bond was left with little choice but to stop play on the 84th minute as unrelenting rain left a number of puddles on the pitch.

Play eventually re-started after a 10-minute delay but with both teams struggling to play football on the waterlogged surface, the ball held up in a puddle and Norris managed to stab it into the net.

"I think we took our foot off the gas and thought that the game was over, and it never is.

"We're not going to blame the conditions. It's the same for both teams. We've got to manage that period better at 3-0. I made substitutions but I replaced quality with quality.

"That's 24 goals we've scored in 11 games and we're unbeaten in 11 games, so we have to try and take the positives out of it.

"There are certainly not a lot of positives to take out of the last 30 minutes, but there are plenty to take from the first hour."