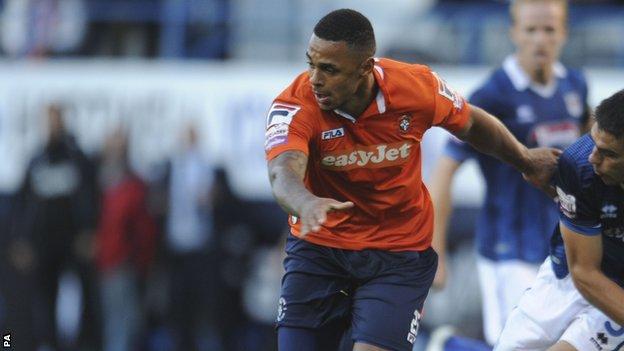 Top scorer Gray opened the scoring when he fired through the legs of Nuneaton goalkeeper James Belshaw.

Gray then flicked home the Hatters' second from close range when he met a Scott Griffiths cross.

He added his third on the day and his 17th of the season when latching on to a Steve McNulty through ball and slotting home from outside the box.

The game had been stopped at 1-0 for 10 minutes early in the second half due to a hail and lightning storm.

But the win means Luton are now unbeaten in 20 league matches and lead the division by three points.

Nuneaton have now lost three of their last four and drop to ninth.

"Maybe there was a bit of rustiness, but conditions weren't good. I thought coming out at second half, we understood a bit more about the conditions, and played the conditions.

"Some of our movement in the second half was very very good. Our passing in difficult conditions was very good.

"The combination of those two [Andre Gray and Paul Benson] is very very good. I also felt the contribution from the two new lads [Ryan Inniss and Cameron McGeehan] was top quality.

"I hope there's attention [for Gray] because that means we're doing something right. But no-one leaving at the moment, not in this window."