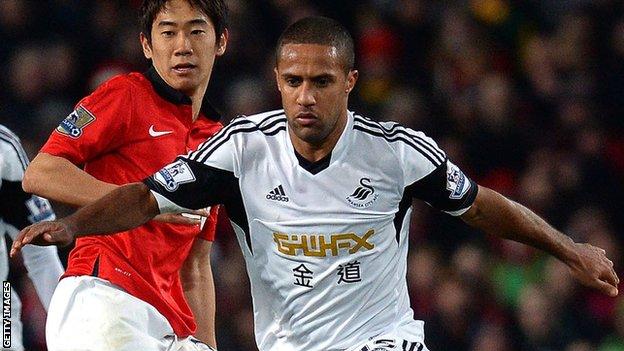 Wayne Routledge says Swansea will be ready to fight for their Premier League survival if they get into a relegation battle.

And winger Routledge believes it's up to the players to work harder.

"It's down to the whole squad to put in that extra five or 10% and hopefully start by picking up some points at the weekend," he said.

Swansea's mid-table position in the Premier League disguises the fact they are only three points clear of bottom-of-the-table Cardiff City.

And while Routledge does not accept the Swans are yet in a relegation fight, he believes the team will have the strength to battle it out if necessary.

"If it comes down to it everyone's going to be fighting for their lives and their survival in the Premier League," added Routledge.

"Your natural human instinct is to fight for what you have, and you never want to surrender it.

"I don't see that being a problem."

Swansea have lost four games more at this stage of the season than they had last season when they finished in the top 10.

And Routledge thinks the success Swansea have enjoyed since winning promotion to the Premier League in 2011 adds to the pressure on the players.

"Managing expectations is difficult especially after the last two seasons we've had here," he said.

"We are where we are at the the moment - we are mid table, but I feel our destiny is very much in our own hands, whatever happens from now on.

"I think I saw a tweet saying we've got a 19-game season to pick up as many points as we can and that's how I think we have to take it from now on.

"We'll keep performing and hopefully we can pick up some points.

"If you don't pick up points it [the relegation fight] can suck you in as quickly as you can get out of it.

"It's an eye opener and it's up to us now to respond and pick up as many points as we can between now and the end of the season."