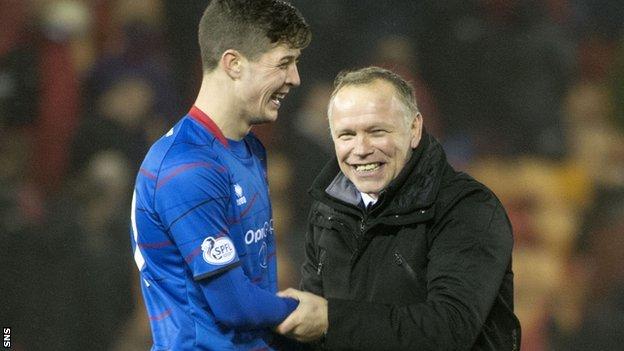 Inverness Caledonian Thistle manager John Hughes expressed his satisfaction at keeping a clean sheet in the 1-0 win at Aberdeen.

It was the Highlanders' first victory in six games.

"What we've done on the training pitch is starting to close the back door," Hughes told BBC Radio Scotland.

"Clean sheets win you football matches and when you have a guy like Billy McKay in your team, you're always capable."

Although McKay was a busy presence at Pittodrie, Danny Williams proved to be the match-winner on this occasion with his first goal for Caley Thistle.

He rifled in off the crossbar in the 22nd minute to bring to a halt Aberdeen's six-game unbeaten run.

"I felt we deserved it," said Hughes. "We were a bit lacking in a physical presence with suspensions and injuries, but we stood up to it.

"Throughout the match, some of the football was exceptional. All the work you do on the training pitch is coming to the fore and all the best chances - a right good half a dozen of them - all fell to Inverness."

The Highlanders remain fourth in the Premiership but make up ground on Aberdeen and Motherwell, who lost 3-0 to Celtic.

We were a bit lacking in a physical presence with suspensions and injuries, but we stood up to it.

"I don't' get carried away with results," said Hughes.

"What I try and do is coach as a football manager and make sure the work is done on the training pitch and hopefully you can educate them, and it manifests itself in the game come Saturday."

Hughes also explained some of the reasoning behind Russell Latapy's appointment as assistant manager at the Caledonian Stadium.

Latapy played with Hughes and Hibernian and played under him at Falkirk.

The 45-year-old former Trinidad and Tobago head coach will team up again with Hughes after leaving his coaching post with Portuguese club Boavista.

Hughes added: "I don't go in for taking in someone because he's a friend. I take someone in because he's good for the club.

"He's a very astute, clever tactician of football. He knows the game like the back of his hand and had a massive part to play in what we did at Falkirk.

"Collectively, as a team, he's good about the dressing room and he's a fantastic fellow. I'm looking forward to him coming in on Monday or Tuesday."