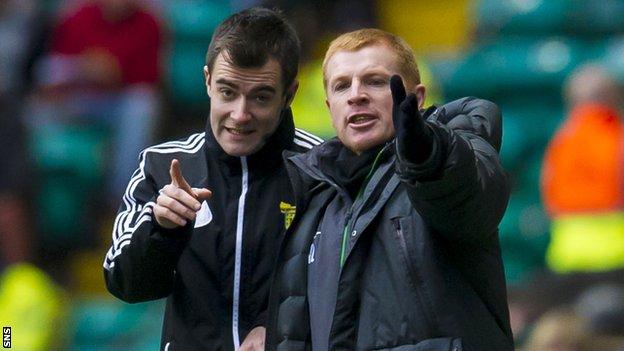 The Steelmen were aiming for a seventh straight victory but a Kris Commons double and Stephen McManus's own goal saw Celtic continue their unbeaten run.

"That's the best we've played at home in the league this season," Lennon told BBC Scotland.

And the Celtic boss described Anthony Stokes's dismissal for a challenge on Keith Lasley as "harsh".

Commons, the SPFL player of the month for December, opened the scoring within five minutes and added a second when Stokes was felled in the box by Gunnar Neilsen.

"Coming off the back of the break, I was worried they might be a bit rusty, but the first-half performance was fantastic," said Lennon.

"I've got to give credit to Motherwell. They made a game of it. They were positive and it made the afternoon an entertaining game to watch, the supporters were fantastic and it was a great crowd today.

Lennon reserved special praise for Commons, who has impressed throughout the campaign.

"He's such an important player and he's so clever as well.

"His first goal is instinct, he follows in, and the second goal was a penalty. But his all round game is very good at the minute and he's got the quickness of feet and thought. He's playing at the top of his game. [James] Forrest on that form is a handful for any team - he makes us better when he plays."

On Stokes's dismissal, Lennon feels his striker was a little unlucky to be given his marching orders.

"I felt it was harsh - he was late, to be fair, but it was a genuine attempt to get the ball," said the Celtic boss.

"I can understand the referee making that decision, but I come down hard on players who get sent off, but in this case it was a genuine attempt. He mis-timed the tackle and he got a red card, so we'll address it this week."