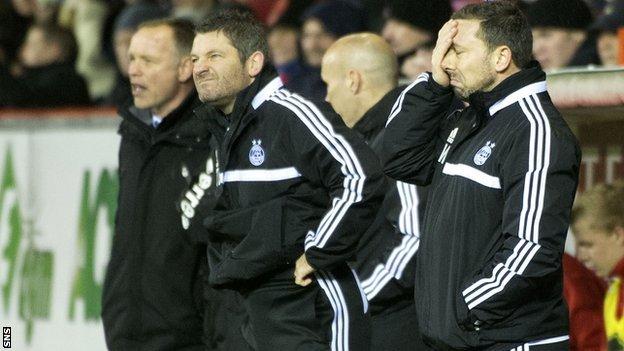 Derek McInnes admitted Aberdeen were below-par in the 1-0 defeat to Inverness, but insists they will move on from it.

"We never got to the level we're capable of," McInnes told BBC Radio Scotland. "If we don't get enough at that level, we're vulnerable to that kind of result.

"But we've been on a terrific run, we can't get too despondent about it."

Aberdeen remain second in the Premiership but spurned the chance to increase the gap between them and third-place Motherwell, who lost to Celtic.

McInnes's side also wasted several opportunities to capitalise at set-pieces, having won 13 corners in the match.

"Credit to Inverness," said the Aberdeen manager. "They broke on us well and I thought they worked extremely hard to nullify our passing game and we never got going at all.

"I thought we started the game well and forced a lot of play in and around the 'keeper; set plays that we never took full advantage of.

"I don't think we had enough concerted pressure after that and it was a bad day for us all round."

The hosts' best chance came midway through the second half when Willo Flood's half-volley was tipped over the crossbar by Dean Brill.

Other than that, Aberdeen failed to create any clear-cut opportunities.

Inverness worked extremely hard to nullify our passing game and we never got going at all.

"We never worked the ball well enough and exerted the control we normally do in games home and away," added McInnes.

"I felt it was a bit too frantic for my liking, but we'll cover it, and address it and hopefully try and get better next time out.

"We've gone on a few runs this season already, which the players deserve huge credit for. They've really shown that consistency of performance.

"This was a bad result in among that. The performance wasn't what they were capable of, and we need to bring more to the game if we want to win more games.

"We dust ourselves down and move on to Motherwell next week."