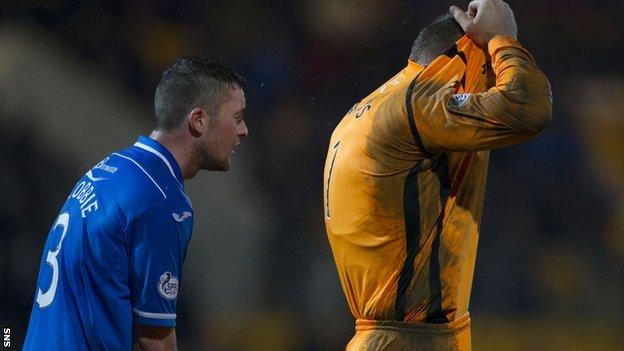 St Johnstone manager Tommy Wright was left reeling from a triple blow after the 3-3 draw with Hearts.

His team conceded two late goals after having Steven Anderson and Alan Mannus sent off.

They also had kit-man Tommy Campbell taken to hospital during the game after complaining of chest pains, and Murray Davidson went there too after being stretchered off with a knee injury.

"It's not been a good day from our point of view," said Wright.

"We should be talking about how well we played and scoring three goals again, but unfortunately we're not and I am obviously disappointed to lose two points.

We should be talking about how well we played and scoring three goals again, but unfortunately we're not.

"We were by far the best team, even with 10 men, but it is always difficult going down to nine men and having no goalkeeper."

Wright will attempt to have overturned the 21st-minute red card shown to defender Anderson after he pulled down Hearts striker Dale Carrick.

"We will definitely be appealing that," he said. "The lad has taken a touch to go in an even wider area and he is a good 35 yards from goal.

"I have asked to see the referee and will be asking him about that one."

Wright admitted that it would be more difficult to appeal against the red card shown to Mannus after a goalmouth melee that followed a goal by Carrick that pulled Hearts back into the game at 3-2.

Hearts midfielder Ryan Stevenson was sent off along with the St Johnstone goalkeeper, but the home manager thought it was simply a case of his players looking to protect defender Frazer Wright.

"In those situations we should walk away, but it's difficult," said Wright.

"Alan sees three or four Hearts players trampling over Frazer and gets involved in something, Stevenson comes running in out of left field then two players who really then, that do very little, get sent off," he said.

"It possibly could have been two yellows instead.

"So there were big decisions in the game that caught up with us."

Wright thought an appeal against his goalkeeper's red card might not be as advisable.

"With appeals, you have to prove beyond reasonable doubt and that can be difficult," he said.

Davidson was taken off after 37 minutes after landing awkwardly and was transported to hospital during the half-time break.

"I think he's going for an operation," said Wright, who revealed that former Forfar Athletic, Montrose and Arbroath manager Campbell had also been taken away by ambulance.

"He has gone to hospital with chest pains. I think it happened during the game. So our wishes go with them."