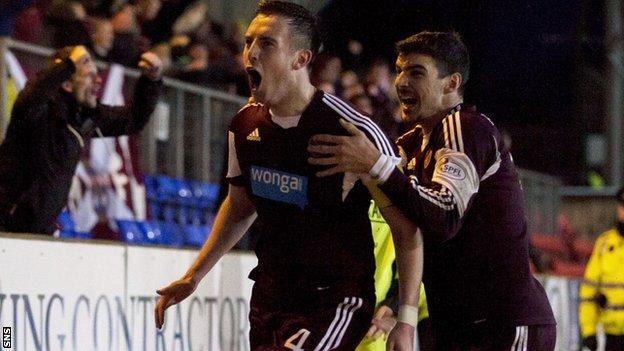 Hearts manager Gary Locke expressed his pride and admiration for his side after their late fight back to secure a 3-3 draw away to St Johnstone.

"We have a young team, but you saw the spirit we have in the camp," said Locke.

"In the last 10 minutes, they showed the character in the squad, especially after having two penalties against us."

Hearts, who started the season with a 15-point penalty for being in administration, are 21 points adrift of Partick Thistle at the foot of the Scottish Premiership.

"It is a difficult season for us, but hopefully our luck will turn in the second half of the season," added Locke.

The manager was full of praise for substitute Nicholson and fellow scorer Dale Carrick.

"I think we have a wee diamond there," he said of 18-year-old winger Nicholson. "I was delighted to see him and Dale Carrick getting their first goals for the club."

Defender Kevin McHattie gave away two penalties, the first after appearing to hold back Nigel Hasselbaink and the second when handling a flick from Saints' hat-trick man Stevie May.

"The boys tell me that the first one was outside the box, but I think the second one does strike his hand," said Locke.