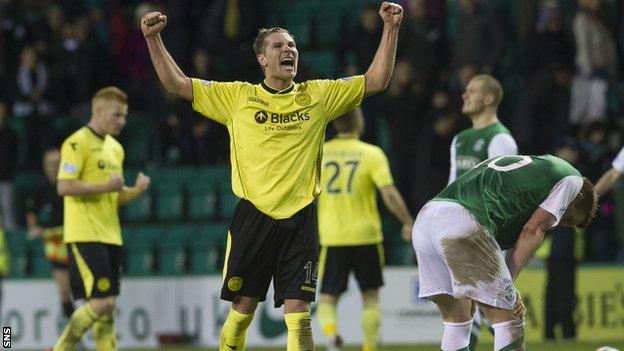 St Mirren manager Danny Lennon was thrilled to end a run of three defeats in the Premiership with a 3-2 success at Easter Road.

The Paisley side raced into a 3-0 lead before the interval and held on in the face of fierce Hibs pressure late on.

"I was delighted with what we brought to the game in the first half - the hunger and desire," said Lennon, whose side move up to eighth.

St Mirren took advantage of some sloppy home play to score three unanswered goals in the opening 45 minutes courtesy of a Ben Williams own goal and efforts from Adam Campbell and Steven Thompson.

Hibs mounted a fight back after the break but could only muster a James Collins brace - the second of which came in the 88th minute.

"We came in at half-time and you could sense one or two had not been in this position before," explained Lennon.

"You try to pre-warn them not to change anything, but it happens. From the first half to the second half it was top drawer with different types of performances.

"I thought to a man we were at it in the first half and in the second half we pulled those sleeves up. I'm delighted our young pups handled that experience well."

Lennon, meanwhile, believes his captain Jim Goodwin is being unfairly singled out by referees.

The Buddies midfielder was substituted in the second half after picking up a booking and his manager said: "I really fear for Jim in terms of his career.

"There is certainly a lot being put upon him at this moment in time. He's handled it the best way he can.

"There is certainly differences happening there. He is no angel and no saint and he has brought a lot upon him himself."