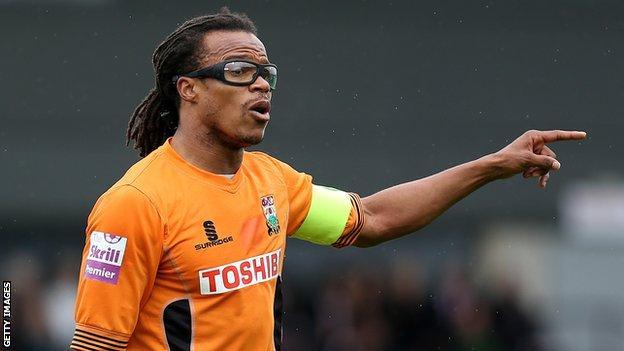 The former Netherlands midfielder, 40, joined the Bees in October 2012.

"Everybody associated with the club would like to thank Edgar for his contribution during his time here," a club statement said.

"The club would also like to wish Edgar the very best of luck in what we have no doubt will be the continuation of an illustrious career."

The life and times of Edgar Davids

The Dutchman, who has represented clubs including Ajax, Juventus, Barcelona and Inter Milan in his career, came out of retirement and made 29 appearances as Barnet were relegated from League Two last season.

Davids made nine appearances for the Bees in the Conference Premier this season but was sent off on three occasions.

He threatened to retire in December following his third dismissal, saying he was a "target" and that some decisions were "exaggerated".

Davids, who has also had spells in England with Tottenham and Crystal Palace, leaves The Hive with Barnet 10th in the table, three points off the play-off places.

In total he made 38 appearances for Barnet, scoring one goal and receiving five red cards.

In Italy, he picked up three Serie A championships with Juventus and the Coppa Italia with Inter Milan.