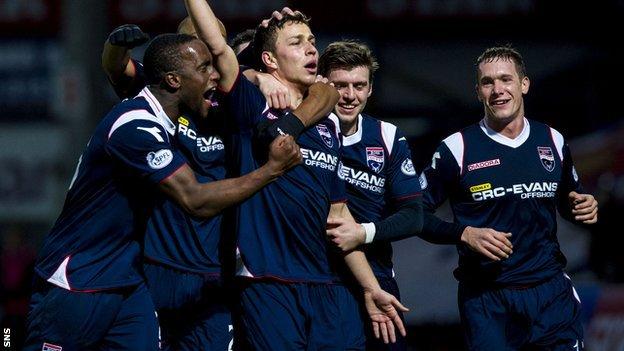 The Slovak midfielder, on loan from Cardiff City, scored twice in Dingwall.

"Filip Kiss's two goals today were exceptional," said Adams, whose side are unbeaten in 2014.

"He's great to watch, the people here will be delighted to see the quality he's got, he is a fantastic football player, he's quality on the ball."

"The new signings who have come in have all performed well," said Adams. "It worked well for us last year and this year it has as well.

"It takes a brave manager to do what I have done today and play six new players. It's worked well for us we've taken 10 points from four games.

"To win against a Dundee United side people have been talking about the whole season and to win 3-0 is great.

It takes a brave manager to do what I have done today and play six new players.

"We have beaten three teams in the top six now, the players who played today were excellent.

"Our main purpose is to stay in the league. We know the limitations we have at the football club. We are not in the same spectrum as everybody else - we just want to keep on winning games."