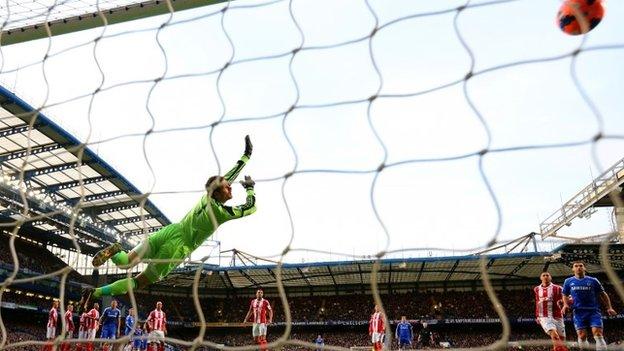 Oscar's sublime free-kick was enough to end Stoke's interest in this season's FA Cup and earn Chelsea a fifth round trip to Manchester City.

The Blues, winners of the trophy four times in the last seven seasons, wasted a bundle of chances and hit the post twice in a one-sided cup tie.

But they only had Oscar's breathtaking 25-yard strike to show for their dominance and were forced to endure a nervy final few moments before securing the victory.

The Potters barely threatened but Stephen Ireland wasted a great chance before the break, smashing a shot into the side netting from close range.

Stoke's hopes of a cup shock had seemed slim and so it proved.

"A world-class goal separated the teams, but Chelsea looked very dangerous on the break.

"I was impressed by Nemanja Matic. He was very disciplined, and broke up any Stoke attacks. He didn't put a foot wrong, but I would like to see how he would do if someone ran at him."

The visitors had won just two games since an impressive last-gasp 3-2 win, over Chelsea on 7 December, beating Aston Villa in the league and Championship leaders Leicester City in the last round of the Cup.

But six consecutive victories and 10 wins from 13 since that setback at the Britannia have taken Chelsea to within two points of the Premier League summit.

Chelsea's failure to make their first-half dominance count proved their undoing the last time the two sides met. They were once again guilty in front of goal but it did not matter.

Facing a side likely to stack up in defence and flood the midfield, it looked like just the sort of match when the guile and quality of Manchester United new boy Juan Mata would be most required.

But the Blues did not need their two-time player of the year, and once again it was the pace, direct running and trickery of Eden Hazard and Oscar that did the main damage.

With the giant figure of Nemanja Matic dominant in midfield on his (second) full debut, the hosts bossed possession and made full use of it.

Oscar scored a majestic 25-yard free-kick, curling the ball over the wall and into the far corner to win the game.

But it was Hazard who stood out with a breathtaking display. The Belgian tormented the Stoke defence from the first minute, sparking all that was good about a fine attacking display and earning bookings for Geoff Cameron and Marc Wilson.

Hazard and Chelsea started impressively. Samuel Eto'o shot narrowly wide inside two minutes and although Stoke could have easily have led when Peter Crouch sent a header off target soon after, it was a half dominated by the hosts.

Several promising Hazard-inspired breaks failed to lead to strikes on goal but, with the pressure mounting, Oscar put the Blues ahead - and they should have been out of sight by half-time.

Frank Lampard could not stretch out to divert the ball in from close range after a snaking run from Hazard and also shot over from 20 yards.

In between Oscar hit the post with a well-struck low cross-shot that led to Stoke's best chance of the game.

Chelsea are in the FA Cup fifth round for the 15th time in the last 16 seasons.

The Potters broke with good pace and worked the ball in to Ireland but he smashed a near-post shot just off target with Mark Schwarzer beaten.

However that opening provided brief respite for the visitors.

The second half started as the first ended, with Chelsea cracking the frame of the goal and Jose Mourinho doing plenty of head shaking at his side's failure to kill the game off.

A fierce strike by Andre Schurrle crashed against the post with Asmir Begovic beaten and Oscar almost added his second with a sweet first-time effort that curled just wide of the far post.

The chances remained Chelsea's though. Lampard had a fizzing low shot well saved by Begovic and Eto'o inexplicably spooned an effort wide after a goalmouth melee, the striker getting his feet in a muddle five yards out with the goal gaping.

Begovic then made a brilliant diving stop to keep out a thunderous David Luiz free-kick, but ultimately Chelsea did not need the luxury of a second goal.

Check out the action from today's FA Cup ties on the BBC Sport Facebook page.