A Samuel Eto'o hat-trick inspired Chelsea against Manchester United in the Premier League game of the weekend.

But what were the main talking points to come out of the other fixtures? 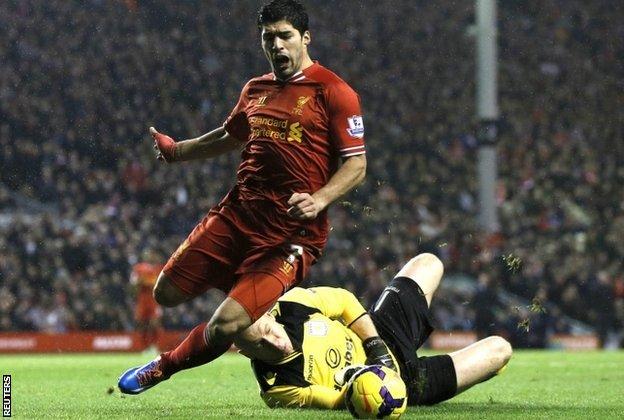 With Liverpool trailing 2-1 at home to Aston Villa, Luis Suarez chased a throughball inside the Villa penalty area and the Uruguayan, heading away from goal and with work to do, was sent sprawling by goalkeeper Brad Guzan's challenge. Villa were adamant no contact had been made but Steven Gerrard coolly side-footed home the penalty.

"There was contact but if he wants to stay up he could try and stay up."

In a vote for MOTD on Saturday, 69% of people felt the Uruguay forward did dive but the team of Alan Shearer, Danny Murphy and Gary Lineker concluded that Suarez had not committed an offence.

But former Liverpool and Aston Villa striker Stan Collymore took exception to the former players' views and accused them of condoning cheating.

"The fact some very well respected ex-pros genuinely believe diving/cheating is justifiable says more about the game in 2014 than me," he said.

And Lineker responded: "No ex pros think diving/cheating is justified. Some of them just happen to not think that Suarez dived. Different altogether!"

Pat Nevin on MOTD2 Extra: "The phraseology is that he went down easily. There was contact but if he wants to stay up he could try and stay up. He made no attempt to stay up. He will take any sort of hit and make the most of it, that is what fans are trying to say. I spent my entire career trying to stay on my feet, but these days you take a hit and fall.

"Did he try and stay up? No. Don't get my argument wrong, I would have given a penalty and I have nothing against Luis Suarez. Things have changed in the modern game and if you don't go down your manager will get annoyed at you.

Manchester City became the quickest side in Premier League history to score 100 goals in a season with their tally now standing at 103 in 34 games in all competitions.

Edin Dzeko struck after 14 minutes to bring up the milestone and further goals from Jesus Navas, Yaya Toure and Sergio Aguero saw off Ole Gunnar Solskjaer's Cardiff side.

City boss Manuel Pellegrini said after the game: "I think it's very important for the team, it's not easy to score 100 goals at this stage of the season."

Striker Edin Dzeko added: "We have an amazing team. We are scoring so many goals - 103 so far and we still have plenty more games until the end of the season, so I think we will score more."

Former Newcastle striker Shearer, speaking on MOTD, said: "You just know they are going to score goals and you know they will create chances. Not all of their players will have off days - Edin Dzeko might have one or Sergio Aguero might have one, but not all of them and they have so many options."

The Manchester Evening News captured each City goal in a montage photo gallery, while the club showed their generosity by laying on almost as many cakes before the game for the attending journalists. 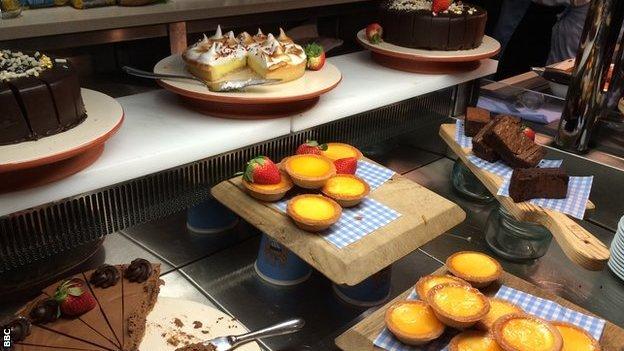 Manchester City's 100th goal on Saturday was the first to have been 'awarded' in the Premier League by the Hawk-Eye monitoring system since it was introduced at the start of this season.

Cardiff's Kevin McNaughton thought he may have cleared the ball but, after a brief pause, referee Neil Swarbrick was informed by Hawk-Eye that the left-back had failed and the goal was given. 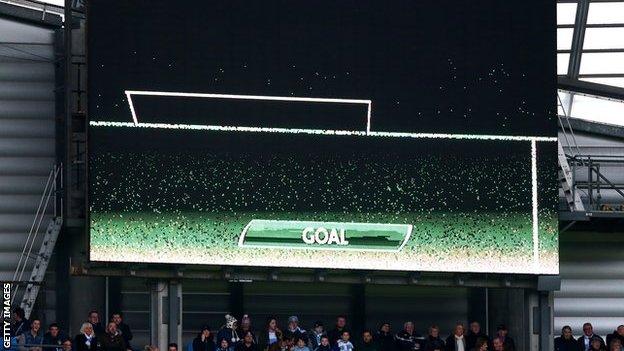 Former Everton midfielder Kevin Kilbane was co-commentator at the game and he said: "The linesman didn't flag, he definitely did not indicate it was a goal. All the Cardiff players ran to the referee protesting to him, but he immediately went to his watch and gave the goal."

BBC Sport's Tom Rostance said on Saturday's live text commentary: "You have to say it worked perfectly. The officials hadn't awarded the goal - it was cleared away very quickly - but the goal was then given instantly as soon as referee Neil Swarbrick glances at his watch. Zero delay. the technology worked perfectly."

BBC Sport's Chris Bevan, reporting on the game from the Etihad Stadium: "The celebrations at Etihad Stadium came in instalments, as some fans took time to realise referee Neil Swarbrick had given a goal. It gave a bit of added excitement - and confusion - to the occasion before they were shown the Hawk-Eye replay on the big screens around the ground to prove Swarbrick's decision was correct."