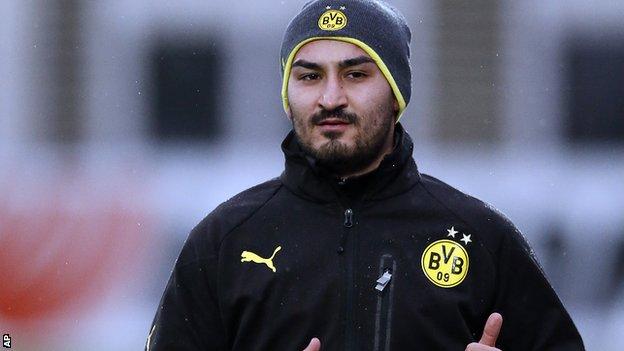 Borussia Dortmund midfielder Ilkay Gundogan will miss the resumption of the Bundesliga as he continues his recovery from a long-term back injury.

The Germany international, 23, has not played for the 2013 Champions League finalists since he was forced off on the opening day of the season.

Gundogan has returned to training but is short of match fitness.

Gundogan was an instrumental part of the Dortmund side that reached last season's Champions League final at Wembley and finished as Bundesliga runners-up behind Bayern Munich.

But he only has 18 months left on his current contract at Westfalenstadion and has been heavily linked with a move to Premier League champions Manchester United.

After injuring his back against Augsburg on 10 August, he recently returned to training, but was sent home early from a winter training camp in La Manga because of illness.

Klopp's fourth-placed side are already trailing leaders Bayern Munich by 12 points at the halfway stage.