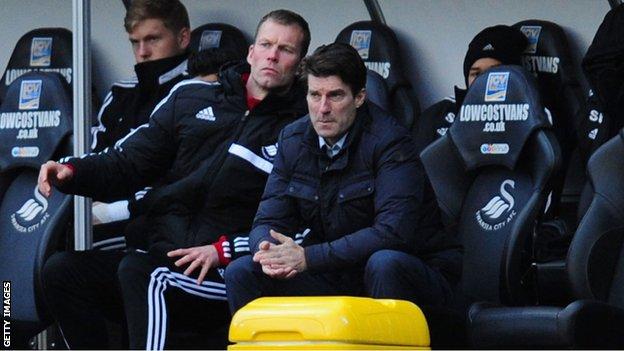 The Swans have not won since beating Newcastle 3-0 on 4 December.

And after Sunday's 3-1 loss to Spurs they face crucial games against fellow strugglers Fulham, West Ham, Cardiff and Stoke in February.

"I think we have to look at ourselves and [ask] what is it we need - and we need a win," said the Dane.

Swansea dominated the first half hour against Tottenham, forcing goalkeeper Hugo Lloris into a series of saves and hitting the cross bar.

But Emmanuel Adebayor scored in Tottenham's first clear-cut attack, and Swansea did not recover.

"We have to accept this is a very difficult moment for us," admitted Laudrup.

"We had a couple of good chances, we hit the cross bar - and then the first time they hit the target they score a goal.

Swansea are handicapped by the absence of five outfield players, with Michu, Jonathan de Guzman, Jose Canas, Pablo Hernandez and Nathan Dyer all missing against Spurs.

And the sight of midfielder Jonjo Shelvey limping off early in the second half was a further worry for Laudrup.

However, the Dane believes it is the damage to his team's confidence which is the biggest problem facing Swansea.

"It is obvious when you go some time without a win it hurts some players a bit," he said.

"And the only way you can change that is by winning a game or two, and that's what we have to do.

"We have to bounce back and win the game or maybe two games that will give that group confidence.

"There's still a lot of teams more or less in the same situation - but I think we have to look at ourselves and say what is it we need - and we need a win."