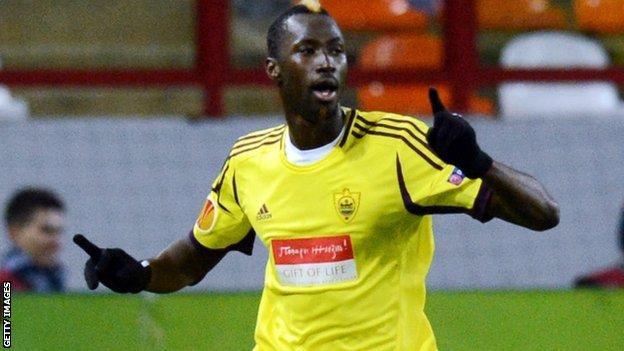 Everton transfer target Lacina Traore has been granted a work permit ahead of a proposed loan move from Monaco.

Talks with the French side are ongoing and Traore, 23, has passed a medical despite a minor hamstring injury.

"Lacina is a player I really like. He is someone who would fit in really well in the role we want," said Everton boss Roberto Martinez.

The 6ft 8in Ivory Coast forward had previously been granted a work permit for a failed move to West Ham.

Hammers boss Sam Allardyce admitted on Saturday that, despite reaching an agreement with Monaco, it was unlikely Traore would move to Upton Park.

"[Everton] can apply for the work permit now. If we got it, they'd know they'll get it," said Allardyce.

Traore only moved to Monaco from Russian side Anzhi Makhachkala at the start of January, and any move to Goodison will be a loan deal.

"He is a very talented footballer and has already had a couple of moves costing nearly £30m, added Martinez after his team's 1-1 draw with West Brom on Monday.

"We need to go through all the necessary routes to try and hopefully we can do that over the next few days."

Traore, who scored 12 goals in 24 appearances during the 2012-2013 season, played alongside Chelsea forward Samuel Eto'o at Anzhi after joining from Kuban Krasnodar in June 2012.