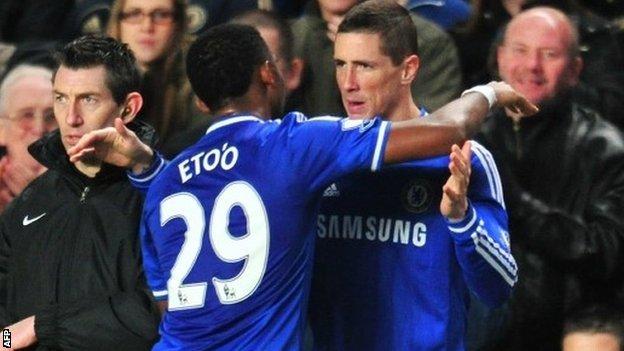 Chelsea striker Fernando Torres will be out of action "for a few weeks" with a knee ligament injury, says Blues boss Jose Mourinho.

Torres was a 79th-minute substitute for Samuel Eto'o, who scored a hat-trick in the victory at Stamford Bridge.

Mourinho said Senegalese forward Demba Ba would now come into contention for a place in his starting line-up.

The Portuguese added: "It's time for Demba. It's a pity because Torres is in a good moment.

"Demba had a fantastic week, it was very difficult for me to leave him out of selection because he worked very, very well.

"The next matches are for Demba or Samuel."

Chelsea have home games against Stoke in the FA Cup and West Ham in the Premier League before a trip to Manchester City, a home game against Newcastle then a visit to West Brom in the next month.