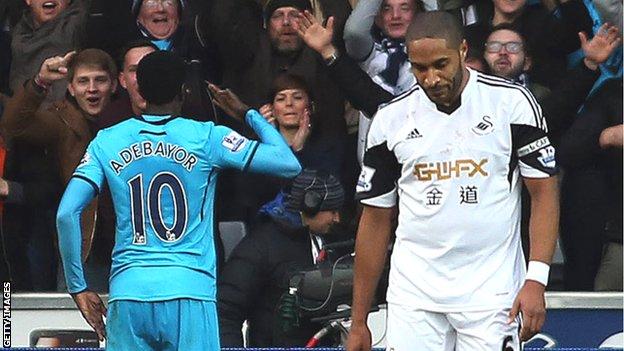 Ashley Williams says Swansea City's players have to "dig in" to fight their way out of relegation trouble.

The Swans are 15th in the Premier League after Sunday's 3-1 defeat by Spurs, three points ahead of bottom-placed Cardiff City.

They now face a run of four league matches against other struggling teams, including Welsh rivals, Cardiff.

"The next four games are going to be important. We need points and the pressure is on," said captain Williams.

Injury-hit Swansea have not won a Premier League game since the 3-0 win over Newcastle on 4 December, 2013 and the defeat by Spurs was their third in a row.

That match comes before a run of four against Fulham, West Ham, Cardiff and Stoke, which Williams believes presents Swansea with an opportunity to pull clear from the relegation battle.

"If we put a little run together, we can pull ourselves away from it," he added.

"We haven't won in eight [league games] and we're still not bottom, so I can take a positive from that.

"We've now got four games against teams in and around us, so they are going to be important.

"The season doesn't end in February, but it's an important period. If we can get wins against these teams, it also stops them from picking up points."

Williams added that the players know they have an crucial period ahead of them.

"At the start of the season we were not looking at being in this position. We're talking and working to get out of it.

"It's time to pull together and really show when it counts.