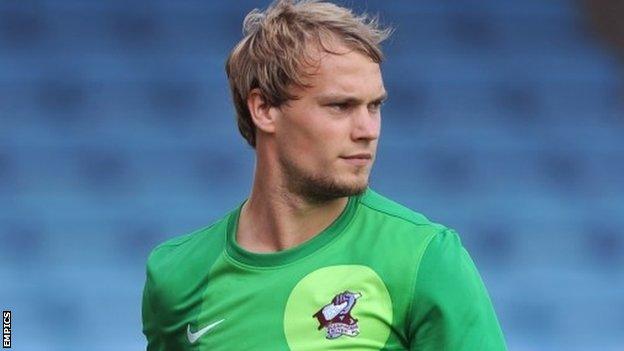 Scunthorpe goalkeeper Sam Slocombe's brilliant second-half penalty save earned his side a draw in their top-of-the-table clash against Fleetwood.

Referee Scott Duncan pointed to the spot when Charlie Taylor went down just inside the box under a challenge from winger Terry Hawkridge.

But Slocombe rescued the hosts, brilliantly turning away the penalty from Steven Schumacher.

The point was enough to keep Scunthorpe at the top of League Two.

The Iron also stretched their unbeaten run to 12 games.

"It was a difficult game, there were two good sides out there - I think Fleetwood was probably the best side we've played all season.

"I didn't think it'd be a 0-0, both teams at the moment are free-scoring - it was a really tight game, but I thought both teams deserved something.

"You have to give credit to the opposition - that's why they're a top team and they've just won four on the bounce."