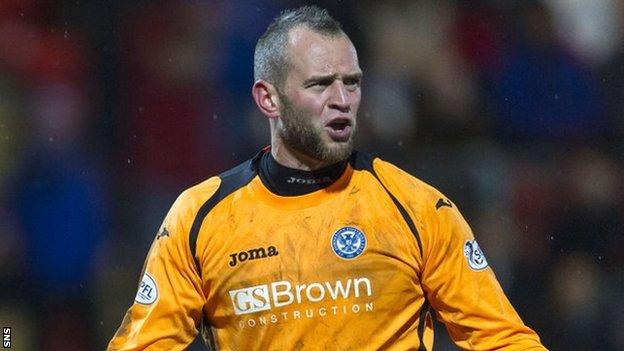 The game at Tannadice was called off because of a waterlogged pitch following a 14:10 GMT pitch inspection.

St Johnstone said on Twitter: "Huge blow to Alan Mannus, who will now miss Saturday's semi-final against Aberdeen due to suspension."

during last weekend's 3-3 draw with Hearts.

While the goalkeeper was automatically suspended for one game, defender Tam Scobbie was already banned for the match against the Dons at Tynecastle after being given

But Monday's call-off means that he and fellow new signing Chris Iwelumo will have to wait until the semi-final to make his Saints debut.

That is a massive blow for Alan Mannus. But we've got someone in Stevie Banks who, when he's played this season, has been outstanding

The 35-year-old former Scotland striker, who moved to the Perth club last week until the end of season after leaving Scunthorpe United, said on Twitter: "Gutted the game is off.

"Everyone was looking forward to tonight. Been a great buzz around the place."

St Johnstone manager Tommy Wright said that, while it was a personal blow for Mannus that the match, for which no new date has yet been announced, was postponed, it would have some advantages.

"The positive out of this is that we've not going to pick up any knocks," he told BBC Scotland.

"It will give us the rest of the week to prepare for the semi-final and, come Saturday, we'll be ready and will be fresh.

"We struggled to get training facilities yesterday, so with the rain overnight we had a call around lunchtime and we were aware there were concerns and it came as no surprise.

"The forecast for the rest of the evening was to be more showers and I think, with that amount of rain, it was inevitable that it was going to be called off."

Wright had sympathy for Northern Ireland international Mannus but thought that Steve Banks, the 41-year-old signed from Dundee United in the summer, would be an able replacement.

"Personally, that is a massive blow," said the Saints manager. "Semi-finals are big games and they don't come along too often.

"But we've just got to deal with it. We've got someone in Stevie Banks who, when he's played this season, has been outstanding.

"He had a very good game last week at Partick Thistle, had an excellent game against Aberdeen when we were up there and kept a clean sheet - he's kept three clean sheets in the four games he's played.

"So, although Alan's regarded as our number one, I think we've got someone who can go in and still do a good job for us."