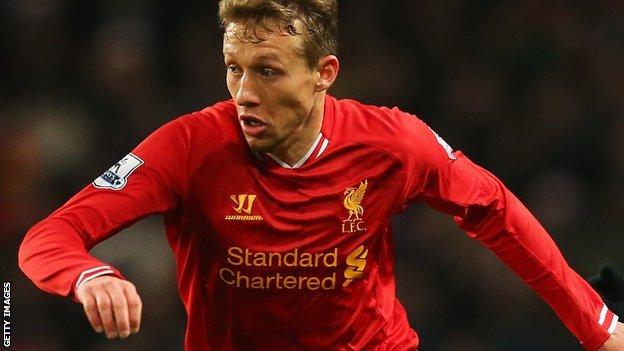 Liverpool midfielder Lucas Leiva is facing six to eight weeks out with a knee ligament injury.

Lucas came on as a substitute at half-time in the 2-2 draw with Aston Villa on Saturday and lasted just 21 minutes before straining medial ligaments.

The Brazilian initially tried to play on after treatment on his right knee but was soon replaced by Joe Allen.

The injury could hinder the 27-year-old's hopes of making his country's 2014 World Cup squad.

Lucas missed most of the 2011-12 season after surgery to repair an anterior cruciate ligament injury in his left knee.

"I would like to let you know that my injury isn't serious and I will be back in a few weeks," the midfielder tweeted.

He then added: "Thanks. #relieved #thedreamstillalive."