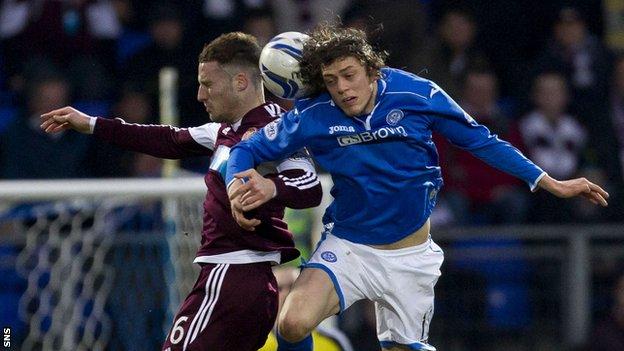 St Johnstone midfielder Murray Davidson has been ruled out for the rest of the season following knee surgery.

Saints boss Tommy Wright told his club's website: "Murray will bounce back but sadly not this season.

"He came down on one leg and knew he had a problem right away. It's desperately disappointing for him."

Davidson was withdrawn after 37 minutes of the draw in Perth.

"It's part and parcel of football and we'll just have to soldier on without him," said Wright.

"It is a massive blow, I thought Murray was getting back to his best.

"He will have an operation tomorrow and we wish him a speed recovery, but we don't know the time scale."

Stevie May fired a hat-trick for Saints, but they were pegged back by Hearts, who netted late on through Sam Nicholson and Danny Wilson to rescue a point.

Wright was forced to reshuffle his pack early in the first half when Steven Anderson was given his marching orders for fouling Dale Carrick.

Kit manager Tommy Campbell, meanwhile, was rushed to hospital during the game suffering from chest pains.

"I spoke to Tommy's wife yesterday and I think he was being released from hospital last night," added Wright.

"They are still doing further tests and they are waiting on results to come back, but I think he has stabilised and that is a good sign."