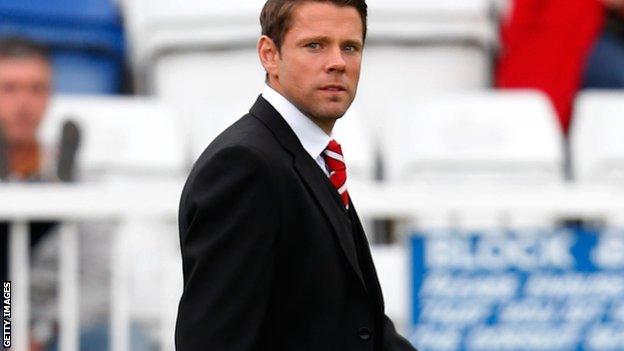 Joyce netted his first goal since March 2012, as Stanley defeated Cheltenham 2-1 in the league on Saturday.

"It is not often he gets up there but it proved to be clinical," Beattie told BBC Radio Lancashire.

He [Beattie] is a calm person and very professional. He oozes the calmness and belief in us which translates on the pitch

"Luke was very pleased to score and I am sure the lads were pleased for him too. He will dedicate it to his new-born daughter."

George Bowerman gave Beattie's side the lead, before Joyce's strike just before half-time.

Jamie Cureton netted for the home side in the second half but Accie held on for a narrow victory.

Beattie also praised Bowerman for "repaying the faith shown in him" after the striker was selected ahead of former Manchester United man Danny Webber.

"Luke is an unsung hero because he is in there week in, week out - doing a great job for us as skipper," he added.

"But George put in a great performance and that is what I wanted from him.

"I spoke to Danny before the game and informed him he won't be playing. He was obviously disappointed but he understood and respects my decisions.

"It is great for me to say the decision was justified."

Having won for the first time in five games, skipper Joyce says the manager's cool persona allowed the side to pick up maximum points and climb to 18th in the table.

"He [Beattie] is a calm person and very professional. He oozes the calmness and belief in us which translates on the pitch," said Joyce.

"We don't get too frantic, we are desperate to hang on to the three points and sometimes in that emotion you can make mistakes and not be switched on.

"When things aren't going for us, we want to talk to each other, enjoy playing and not get too worked up and stressed about it."