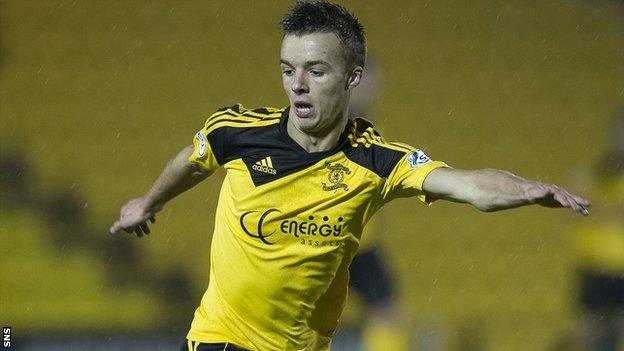 Sheffield United have signed Livingston midfielder Stefan Scougall on a three-and-a-half-year deal for an undisclosed fee and Cardiff defender John Brayford on loan until the end of the season.

League One rivals Peterborough after a deal collapsed during the summer.

Brayford, 26, played under Blades boss Nigel Clough at Burton and Derby before joining the Bluebirds in the summer.

Both could feature against Fulham in the FA Cup fourth round on Sunday.

Although we have said that most of the moves in January will be loans, we are delighted to tie Stefan to a long-term deal

Scougall, who has played for Scotland Under-21s, made his Livingston debut as a 17-year-old in October 2010 and has scored twice in 18 games this season.

Blades manager Nigel Clough told his club website: "We have been tracking Stefan for a while now, as have a number of clubs, and it is terrific that we have managed to secure his signature.

"Stefan is one for the future and we will not demand too much from him this season, although we would like to integrate him into the first-team squad.

"Although we have said that most of the moves in January will be loans, we are delighted to tie Stefan to a long-term deal."

Livingston manager John McGlynn was disappointed to lose a valuable player in his Scottish Championship campaign.

"We wish he could have stayed longer, and myself and the other players feel the same," he told Livingston's website.

"We're also fully aware of how highly regarded Scougs is by the Livi fans.

"But this club prides itself on helping develop young players and we will not stand in his way as he progresses his career in the game.

"I'm already pursuing new signings and am hopeful of adding new faces to the squad before the transfer window shuts."

Earlier this week, on an 18-month contract, the 22-year-old having been released by Kilmarnock.