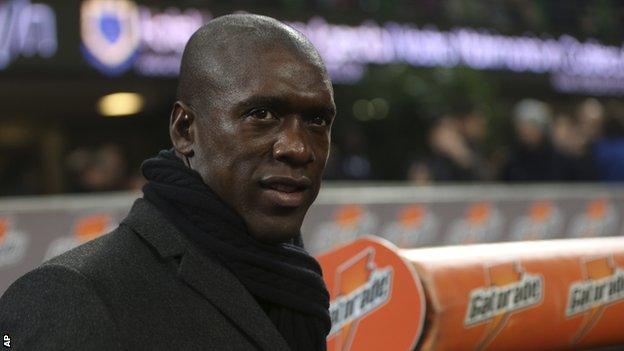 New AC Milan boss Clarence Seedorf has praised the Italian club for their courage to appoint him after he made a winning start to his managerial career.

And the former Milan midfielder guided the Rossoneri to a 1-0 home win against Verona on his coaching debut on Sunday.

"I felt ready for this position and I am learning fast," said Seedorf.

"The club president [Silvio Berlusconi] and [vice-president] Adriano Galliani showed courage to make this decision [to appoint me]."

Milan sacked Allegri after a poor start to the Serie A season left them 30 points behind leaders Juventus.

They climbed up to 11th after Italy striker Mario Balotelli scored a late winner from the penalty spot against Verona.

"This victory is certainly dedicated to all the Milan fans," said Seedorf, who revealed he has been receiving managerial advice from his former Ajax and Netherlands boss Louis van Gaal.

"I am happy for the squad, as there is a lot of work to do and a win helps to make it all feel easier.

"Although we won thanks to a penalty, I still believe we deserved the win considering our overall performance."

The Rossoneri travel to Sardinia to face Cagliari on Sunday.