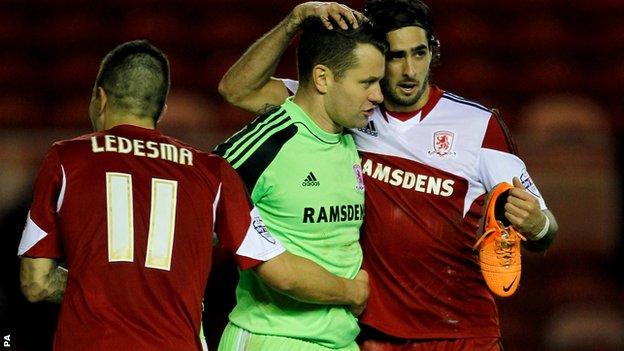 Middlesbrough goalkeeper Shay Given is happy to be in the thoughts of the Republic of Ireland management team.

But the 37-year-old, who refused to be drawn on a possible international comeback.

On Saturday, Republic assistant manager Roy Keane was in attendance as

"If Roy's watching me, great, but I've not spoken to him or [manager] Martin O'Neill. Their next competitive game is in September - a way off," said Given.

Shay Given was the Republic of Ireland's most-capped player with 125 but, since he retired from Ireland duty, Robbie Keane has reached 131.

Before joining Boro, Given - who began a in August 2012 - had not played for 10 months after being displaced as Aston Villa number one by Brad Guzan.

Given's clean sheet against the Addicks was his fifth in his last six league matches.

Boro have won all of those five games, a run which has lifted them eight places to ninth in the Championship.

"I'm just delighted to be back playing. All I'm concentrating on is playing for Middlesbrough," Given told BBC Tees.

"Defensively we've been great, but it's not just me, it's the whole team defending as a unit.

"In the Championship, you have to grind results out and we're doing that well."