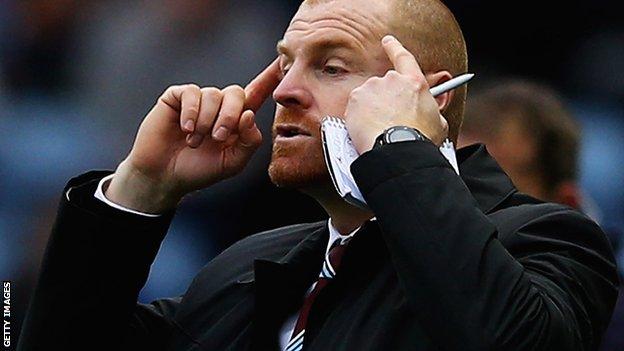 Burnley manager Sean Dyche says his side are a "force to be reckoned with" in the Championship this season.

The Clarets were held to a 1-1 draw at Turf Moor by relegation-threatened Sheffield Wednesday on Saturday.

Despite dropping out of the automatic promotion places, Dyche remains confident and told BBC Radio Lancashire: "The performance showed real good signs of what we are about.

It has become a fortress [at Turf Moor]. We want to improve that and build on it. The fans have been terrific and that helps

"There's a winning desire and mentality and winners don't settle for any less."

Striker Sam Vokes scored his 13th goal of the season for the hosts, but the joy was short-lived as Chris Maguire equalised for the visitors on the stroke of half-time.

Having dropped two points and fellow promotion-chasing side QPR winning against Huddersfield, Dyche was upbeat about the performance of his players, who fall to third in the table.

"There was some tremendous quality against Wednesday with a good framework, good energy and that mixture can never be overlooked.

"When it is really firing we are a force to be reckoned with, everyone knows that."

Burnley remain the only side in the division yet to lose at home and were last defeated on their own ground by Hull in March 2013.

"It has become a fortress," added Dyche. "We want to improve that and build on it.

"The fans have been terrific and that helps. They know the team are giving everything to win games.

"If you are a supporter of a club, the minimum you want is your team to give everything to win a game."