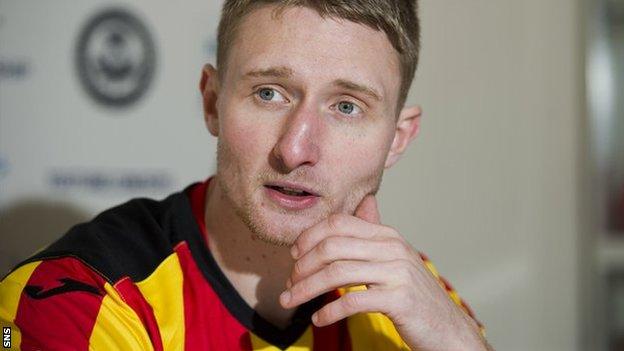 But Alan Archibald has signed the 26-year-old until the end of the season after he only played in four league games for United this term.

Erskine said: "I'm hoping the fans don't hold it against me that I left but at the time - and even now, - I think it was the right move for me."

The midfielder, who joined Thistle in 2009 from junior outfit Kilbirnie Ladeside, is added to the Thistle squad to face St Johnstone on Tuesday.

"To come back and get the first home win of the season would be the ideal scenario so fingers crossed," he said.

"It is a strange one because it was so good last season, teams were fearing to come here.

"We had such a good record so I don't know what the problem is, obviously.

"It might just be a wee bit of inexperience being in the top league for the first time, but hopefully it will change soon."

During his first spell at Firhill, Erskine made 165 appearances for Thistle and scored 35 goals.

Last season he helped Archibald's side to the Scottish Championship title, scoring 16 goals in 44 appearances.

"I spoke to my agent who said there would have been a few options, but to come back to Partick where I know I'm wanted and where people know what I can do, takes a wee bit of weight off my shoulders," said Erskine.

"I loved it here and that's most of the reason I came back, so I hope the fans accept me back."

McNamara still sees Erskine, who netted in the 4-0 win over St Mirren in October, as part of his long-term plans.

"I believe this will serve Chris well and I see him coming back in the summer ready to show what he can bring to Dundee United," he told his club website.

"Chris has been unlucky with injuries and the form of the others in midfield and hence hasn't had the run of games he needs.

"I see this as a great opportunity for him to get games and build up his match fitness and confidence at a place he is comfortable playing."

Ferguson has joined Brechin City, where he spent a loan spell last season, having earlier this term been with League One rivals Dunfermline Athletic.