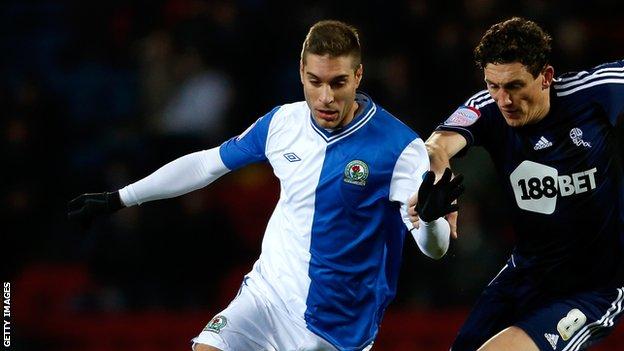 Blackburn striker Ruben Rochina has joined La Liga side Rayo Vallecano on loan for the rest of the season with a view to a permanent transfer.

The 22-year-old on the opening day of the season at Derby and has struggled to regain his place in Gary Bowyer's side.

Rochina joined from Barcelona B in 2011 and spent the second half of last season on loan at Real Zaragoza.

He has made 54 appearances for Rovers, scoring 11 goals.

Meanwhile, manager Bowyer has credited his players' "never say die attitude" despite a week in which they conceded nine goals in two games.

Rovers lost 4-1 at Nottingham Forest in the Championship on Saturday, after being defeated 5-0 by Manchester City in the FA Cup third round replay on Wednesday.

"It was a tough week but we won't be using it as an excuse," Bowyer told BBC Radio Lancashire.

Two first-half penalties from Henri Lansbury had put Forest in control at the City Ground, before Ben Marshall gave Rovers hope before half-time.

But Jamie Paterson and Andy Reid struck in the second period to put the game out of their opponent's reach.

And despite the result capping a miserable week for Bowyer's side, he remains confident his players can turn it around, as they lie eighth in the division.

"This group of players have a never say die attitude and don't know when they are beaten. They keep going and going and we will only get better," said Bowyer.

"It is going to be an important few days in the lead up to the Derby game on Saturday."

Bowyer's side finished the match with 10 men on the field after captain Scott Dann was taken off with an arm injury, having used up all three substitutions.

"We have lost Scott to a nasty challenge and were down to 10 men. I am a little bit concerned about it."