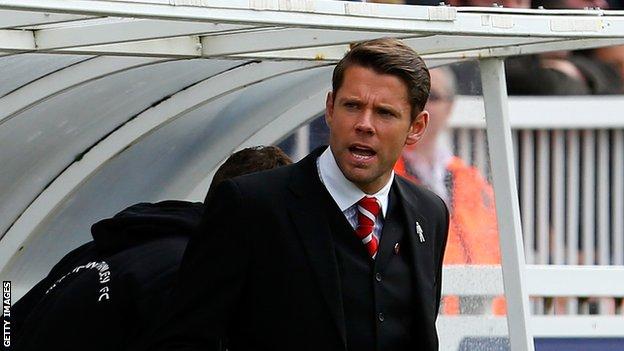 Accrington have been fined £20,000 after manager James Beattie's coaching qualifications were found to have breached Football League regulations.

The 35-year-old former England striker was appointed in May last year, but did not hold a Uefa B licence, required by clubs in Leagues One and Two.

However, £15,000 of the fine has been suspended subject to him achieving the necessary qualification by 1 May 2014.

Accrington have decided not to lodge an appeal against the decision.

"This is a regrettable situation and measures have been put in place to ensure that James Beattie has gained the required qualifications by the deadline of 1 May. Accrington Stanley will make no further comment on this subject," said a club statement.

All managers in the bottom two divisions of the Football League are required under regulation 40 to have a B licence and begin working towards an A licence within three years of their appointment.

The rules also state that managers in the Championship must hold an A licence and be working towards a Pro licence, Uefa's highest coaching qualification.

The fine on Beattie was imposed by a three-man Football Disciplinary Commission panel.

The commission found that the club had twice been reminded about the B licence, when previous boss Leam Richardson resigned in April 2013 and again when Beattie was given the job.

A statement added: "As of the date of the FDC hearing (Jan 2014), James Beattie had still not attended a relevant course or been able to confirm a place on a future course."

His side currently lie 18th in League Two following Saturday's 2-1 victory over Cheltenham.