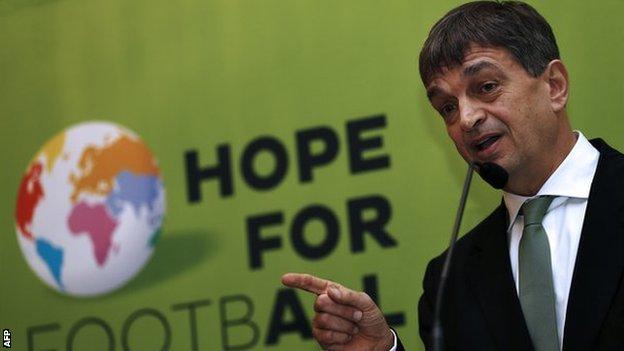 Fifa presidential candidate Jerome Champagne has suggested introducing orange cards that would allow referees to send players to a sin-bin.

The Frenchman, 55, launched his bid to succeed Sepp Blatter as the world governing body's president on Monday.

Fifa's presidential election will be held in Zurich in June 2015.

His other proposals include:

Former referees have mixed views on the proposals with George Courtney saying the introduction of sin-bins for orange cards would work but Roger Milford insisting it would make football "too dictatorial".

Courtney, who officiated in the 1986 and 1990 World Cups in Mexico and Italy, said: "It would have to be under the right criteria but I think the time has come to seriously consider sin-bins.

"I expect the international board would be considering them.

"Red-card offences should still be punished with a red card but maybe for some other offences it would work."

Jerome Champagne is a man of ideas and, clearly, ambition. He spoke to journalists for more than 90 minutes on topics ranging from the reform of Fifa's powerful executive committee to how, as in rugby, only the captain of a team should be able to approach the referee during a game.

Getting into power to implement these ideas will be the tough part. He needs to convince a majority of 209 football associations that form Fifa to vote for him. And who will he stand against? Incumbent president Sepp Blatter and Uefa's Michel Platini are yet to declare their intentions.

Pointedly, Champagne said "no" when asked if he could beat Blatter and wouldn't say if he would withdraw from the race if the 77- year-old decides to pursue a fifth term of office.

But while he may not even make it on to the ballot paper in May 2015, Champagne's manifesto and his electioneering in the coming months will undoubtedly help frame the debate in the race to lead world football.

Champagne, who has been backed by Pele, announced his intentions to become football's most powerful man at a news conference in London.

"We need a different Fifa," he said. "More democratic, more respected, which behaves better and which does more."

However, he admits he will struggle to win the election if Blatter, who will be 78 in March, decides to stand for a fifth term in office.

Asked if he could beat Blatter, Champagne, a former diplomat, said: "I don't think so, he's someone of relevance."

He added: "I don't know whether Mr Blatter will run or not. Of course, as a matter of politeness I informed him what I was planning to do.

"I don't know what he will do. Some people say I am manipulated by him but I tell you 'no'. I stand because I believe in what I am saying."

Blatter has been re-elected three times since becoming president in 1998 but has not yet said whether he will stand again.

A former Fifa deputy general secretary, Champagne worked closely with Blatter between 2002 and 2005 before leaving the organisation in 2010.

Since then, he has been working as an international football consultant in troubled regions including Kosovo, Palestine and Israel and Cyprus.

Champagne suggests players could be sin-binned for two or three minutes for "in-between fouls committed in the heat of the moment".

He cited the example of a player who had already been booked then receiving a second yellow card for taking off his shirt to celebrate a goal.

Champagne also suggests allowing only team captains to approach a referee to question a decision and wants referees to be able to move the ball 10 yards further forward if a player is guilty of dissent.

"More often than ever, matches are being marred by unacceptable scenes of players surrounding and haranguing the referee," he wrote in a document first published in March 2013.

"I cannot stay away from a debate which is so important for the future of football," he said in a recorded message shown at Monday's news conference. "Thus, I support Jerome Champagne and his vision."

Uefa president Michel Platini is also a possible candidate, although the former France midfielder has not yet declared his intentions.