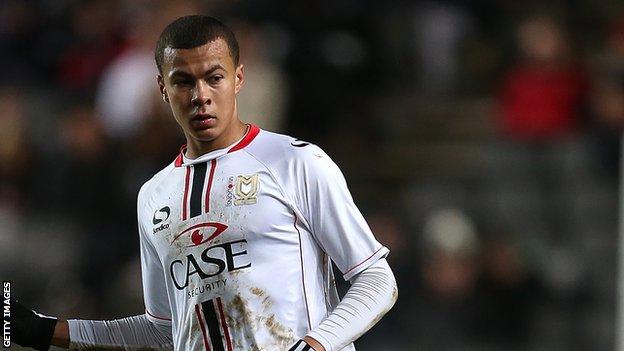 MK Dons boss Karl Robinson has told midfield prospect Dele Alli he will not be sold this season.

The 17-year-old is reportedly being watched by Liverpool and Arsenal after making 18 appearances so far this term.

"I've told him he's not going. It's as simple as that," Robinson told BBC Three Counties Radio.

"I see him as the future of the club. There'll be a day I have to stand to one side, when he's bigger and stronger and wants to fight me," he joked.

Alli marked his first senior start, as a 16-year-old, with a goal in an FA Cup replay at Cambridge City in November 2012, and has found the target three more times since then in a total of 25 appearances.

"He's a scary talent and arguably the best central midfielder in the country for his age," said Robinson.

"We know there's going to be a multi-million pound bid for Dele one day, but it's important he stays where he belongs [for the time being].

"I see him as a young Steven Gerrard, who had a similar frame and build to him. He needs to learn to score more goals and is getting better at that."