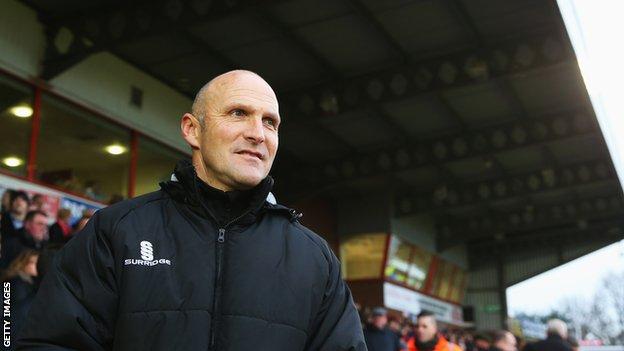 New Chester manager Steve Burr says his side's 2-1 victory over Barnet in the Conference Premier this weekend shows the spirit within the strugglers' camp.

Burr was only appointed as the new boss on Saturday morning, before leading the side to just their second home league win of the season later that day.

"As a team, they showed they are fighting for the cause," Burr, whose team are still in the relegation zone, told BBC Radio Merseyside.

"It was always going to be gritty."

Lewis Turner gave Chester the lead at the Deva Stadium, and despite Jake Hyde's equaliser six minutes from time, Jake Reed hammered home the winner a minute later for the side's fifth win of the season.

The win gives a bit of breathing space ahead of the next game. There are areas which need to be strengthened

The result moved them to within a point of safety and Burr feels gaining the three points is something they can build upon.

"I learnt a lot and I only met the players at lunchtime," said former Kidderminster manager Burr. "I am sure I will learn a lot more in the weeks to come.

"I was pleased with the two centre-halves and we needed commitment and effort. That is exactly what we got.

"The effort is there and we will need that in bundles. Slowly we will work on things and it won't happen overnight."

Burr says there is still work to do, despite his positive start in charge of the club.

"You can see the anxiety in their play," he added. "The passing can be a bit rash at times but that is something we can work on.

"The win gives a bit of breathing space ahead of the next game. There are areas which need to be strengthened.

"Hopefully the win will give a lot of confidence ahead of Woking on Tuesday."