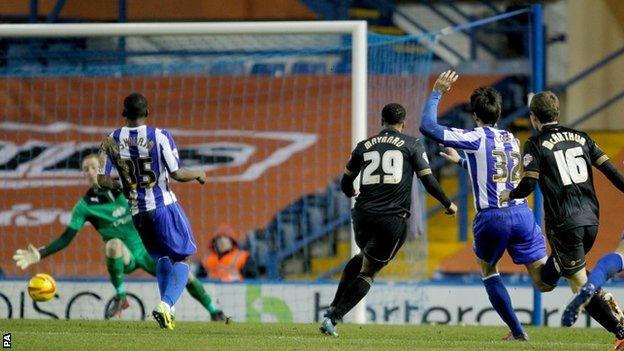 The Latics had gone three away games without scoring - losing two - but Maynard ended that run with a 31st-minute with a low drive.

And seven minutes later he turned in a corner on the line to make it 2-0.

In injury-time, Maynard was denied a hat-trick by former Wigan keeper Chris Kirkland but substitute Marc-Antoine Fortune turned in the rebound.

It was a first defeat in 11 games for the Owls, who dominated the game for long periods.

The match had been re-arranged after being abandoned in December, when a waterlogged pitch forced a halt to the game in the 59th minute with the Latics leading 1-0.

Wednesday have improved since then and Miguel Llera had a free-kick from the halfway line go narrowly wide. They should have led when Atdhe Nuhiu's weak shot was saved by Ali Al-Habsi.

He was made to pay four minutes later when Maynard picked the ball up on the edge of the area and fired a shot across Kirkland into the bottom corner.

Maynard had his second when he got the final touch to a Martyn Waghorn corner.

Substitute Jeremy Helan had a fierce drive from 25 yards tipped over brilliantly by Al-Habsi and the Owls' evening got worse when Jose Semedo was taken off on a stretcher.

Nuhiu and Chris Maguire went close as they pushed desperately for a way back into the game.

But in the third of eight minutes of stoppage time, Fortune scored a tap-in.

"We didn't get it right in both boxes. Between the boxes we did OK. You have to put the chances away when you get them.

"It was a good chance, Atdhe Nuhui will be disappointed, as we all are. We needed that first goal because they are a top side.

"The run had to come to an end, we are disappointed to lose at home. We put that away now and we focus on the next game."

"Stuart Gray was my former manager at Southampton and has done a tremendous job.

"It was a different team to the one we faced in December. It was a big challenge for us, they are a team in form.

"The first goal changed the game. Last week we played better but lost but this time we got the goals at the right time.

"The second half was a professional job, we saw it out. Overall I am delighted to beat such a strong team in Sheffield Wednesday."