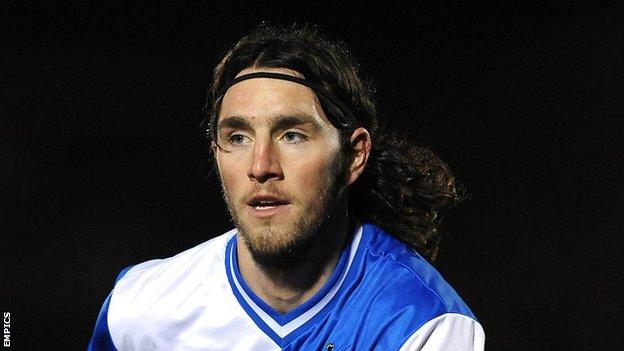 Bristol Rovers pulled away from the League Two relegation zone with a narrow victory over Cheltenham.

Midfielder John-Joe O'Toole netted what was to be the only goal of the game shortly after the half-hour mark.

Rovers' top scorer capitalised on an error from defender Steve Elliott and fired in a low volley for his 13th goal of the season.

Cheltenham upped the tempo after the break but both Terry Gornell and Sido Jombati saw efforts miss.

Referee Iain Williamson inspected the Memorial Stadium pitch two hours before the game and deemed it fit for use, despite the rainfall in the West Country.

The heavy ground hindered the game's flow at times but Rovers managed the conditions well and earned a valuable three points.

O'Toole then pounced on Elliott's slip-up and hit powerfully into the net to give Rovers the lead.

Cheltenham went looking for an equaliser in the second-half but Mark Yates' side lacked the finishing touch. Jombati scuffed his shot after Mildenhall had parried into his path and Sam Deering's long-range strike soared wide.

It means Bristol Rovers move up to 18th in the standings and are now five points above the drop zone, while Cheltenham - without a win since Boxing Day - slip to 15th, two points above their local rivals.

"We've played like that in other games and not won them.

"The one thing that carries you through on nights like this is your attitude.

"The mind games were there from four o'clock onwards - was the game going to go ahead? The referee probably had more mind games than the rest of us.

"We mastered the conditions as best as we could. It was a really good effort from both sets of players."

"Three or four mistakes led up to the goal. It's disappointing we gave them a lead and then couldn't get it back.

"The effort was there. It was a battle between two evenly-contested teams. It's just disappointing we've got nothing from it.

"We felt we should have been a couple of goals up in the first 15 minutes but we weren't ruthless enough."