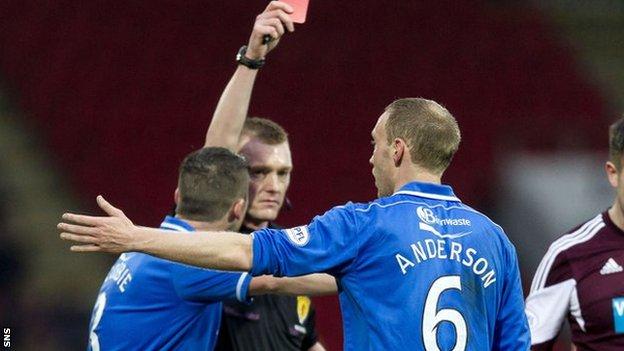 St Johnstone will not appeal against the red card shown to goalkeeper Alan Mannus against Hearts on Saturday but will challenge Steven Anderson's.

Mannus squared up to Hearts' Ryan Stevenson, who was also sent off.

Manager Tommy Wright said: "We are going to appeal Steven Anderson's red, but will not appeal Alan Mannus's."

We will appeal Anderson's - my mind hasn't changed from Saturday

Northern Ireland international Mannus became involved with Hearts midfielder Stevenson during a mass brawl after Sam Nicholson pulled Hearts back to within one goal a minute before the end of the match.

"There is contact between two players and that can't be denied, so the club and I don't think there are enough grounds to appeal," said Wright.

"Steven Banks will come into goal. He did extremely well when he played earlier in the season.

"We will appeal Anderson's - my mind hasn't changed from Saturday."

Wright believes Anderson should not have been sent off because forward Carrick was moving away from goal and was still 30 yards out when he was brought down by the defender.

The appeal against the red card means Anderson will be able to feature in Tuesday's trip to Firhill to face Partick Thistle in the Scottish Premiership.

Mannus's automatic ban means 41-year-old Banks will take over in goal in Glasgow.

A failed appeal against the Mannus red card would have meant the goalkeeper would have been suspended for against Aberdeen on Saturday 1 February.

Hearts have also decided not to appeal against the red card shown to Stevenson, even though the midfielder, as a result, against Inverness Caledonian Thistle the following day.