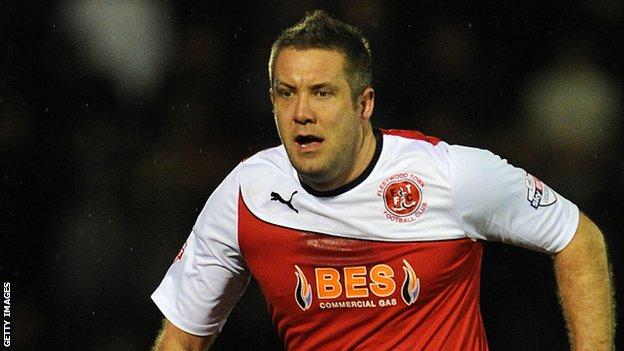 Jon Parkin rescued a point for promotion-chasing Fleetwood at Wycombe, who are now winless in nine games.

The home side took the lead just before half-time thanks to a stunning 25-yard strike from captain Stuart Lewis.

Max Kretzschmar had two good chances to double the advantage but debutant Fleetwood keeper Chris Maxwell denied him with a pair of fine saves.

Parkin made the Chairboys pay as a cleared corner was played back in by Alex Marrow and Parkin hooked home.

The draw means Gareth Ainsworth's side, who have not won since 21 December, sit just two points above the League Two relegation zone.

"I thought we were the better team for most of the game.

"A win on Saturday is the only thing in my mind and I think we can go to Cheltenham and win.

"I'll take that as a good point, but I think we could have had three points, it's frustrating."

"I thought we should have had a penalty at the end. Gareth Evans was definitely brought down and we're disappointed with that.

"I don't think there was much quality on show from either team - it was a bit of a grind and a battle - but I thought we had the better chances.

"I'm not going to say we came here and outplayed Wycombe by any stretch. I'm a realist. But it was a game we were looking to win and I felt we could have won it."