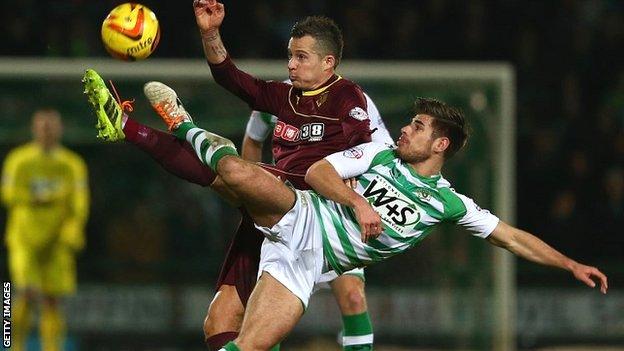 Yeovil remain bottom of the Championship after a tame goalless draw with Watford at Huish Park.

Ishmael Miller had an early effort ruled out for the home side, while Joe Edwards screwed a golden chance wide.

For the Hornets, Alex Merkel also had a goal ruled out for offside and later saw a stinging close-range volley well saved by Yeovil goalkeeper Marek Stech.

Watford had late handball appeals turned down but their eighth draw in nine away games lifted them to 11th.

Yeovil were seeking to complete their first double of the campaign and Miller, who inspired a 3-0 win at Vicarage Road in November, diverted a Joe Edwards shot past Manuel Almunia into the bottom corner, but it was disallowed for offside.

Merkel, one of four changes to the Watford starting line-up, fired over from Troy Deeney's knock-down before having his low effort into the bottom corner chalked off for offside.

Almunia was the busier of the two goalkeepers, a smart save to his left to deny James Hayter one of several key stops, as Yeovil's run without a home league win extended to six matches, dating back to 3 December.