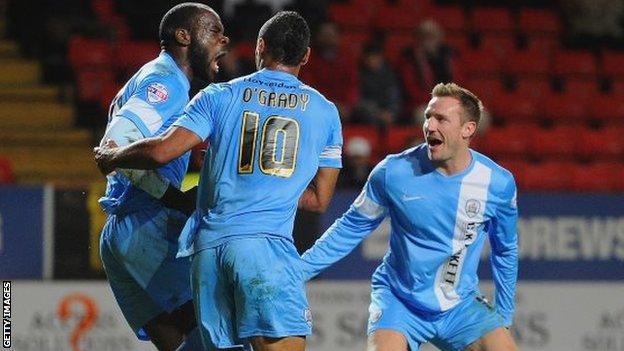 Barnsley gave themselves hope of staying in the Championship with a win at fellow strugglers Charlton.

Defenders Jean-Yves M'voto and Tom Kennedy scored to lift the Tykes off the foot of the table and to within two points of the Addicks.

The home side were dominant but struggled in front of goal again before Astrit Ajdarevic's stoppage-time consolation goal.

Charlton are a point above the relegation zone with five games left.

The hosts, who knew victory would lift them up to 17th and drag the likes of Blackpool and Birmingham into the scrap at the bottom, were on top for large spells.

Jordan Cousins, Johnnie Jackson and Callum Harriott all wasted early chances for Jose Riga's side before Barnsley scored with their first chance.

Dale Jennings swung over a corner and M'voto powered a header downwards and past Ben Hamer in the Charlton goal.

Diego Poyet fired wide after the break and Barnsley then doubled their lead when Kennedy's cross sailed over Hamer and into the net.

Substitute Ajdarevic bundled in a corner in stoppage time but there was no way back for the Addicks.

Barnsley are two points from safety and now have games against Leeds, Derby, Middlesbrough and QPR to play.

Charlton still have three home games against Bolton, Blackburn and Watford, plus trips to Sheffield Wednesday and Blackpool.

"We cannot face more reality than today. We had control of the game, but we have to score before we concede and we conceded a goal from their only opportunity in 45 minutes.

"We have young players so maybe it's the pressure of the situation. But we still have destiny in our hands. They needed to win, we did not."

"It's the result we needed to give ourselves a chance, that's for certain.

"To get the goal like we did was a real body blow for Charlton. After that we controlled it for long periods.

"It's a big psychological boost and gives us the belief we can do it. We won't get carried away but we've given ourselves a chance."