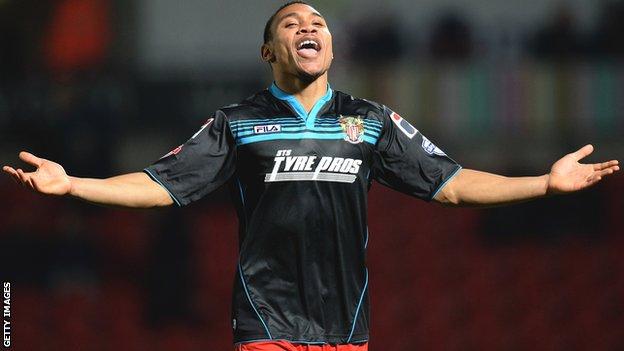 Elliott Hewitt was sent off for handling Francois Zoko's shot and the Stevenage striker scored from the spot for his 14th goal of the season.

Charles met Luke Freeman's cross to put the hosts 2-0 up, before Cody McDonald converted Connor Smith's through ball to reduce the deficit.

A close-range finish from Charles ensured Stevenage a vital victory.

Lucas Akins came close to making it 4-1 but saw his header come back off the crossbar, while McDonald hit the post at the other end.

Stevenage stay bottom of the table on 25 points, but move a point behind 23rd-placed Sheffield United, with Notts County, Shrewsbury and Bristol City, on 27 points.

"I'm very proud of the players for the way they kept going as it was a difficult evening.

"It was a disappointing first goal for us as it wasn't good defending and then you get a man sent off as early as that.

"It was the correct decision by the referee and the wrong decision from Elliott. Elliott should have let it go in as at that early stage if it goes in you have still got 11 men and time to recover."