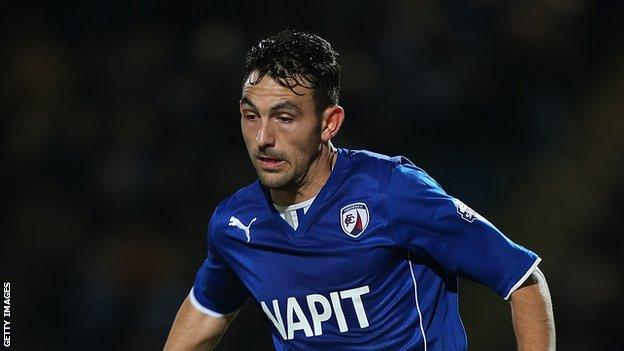 Chesterfield moved into the automatic promotion places with a win in dreadful conditions at bottom side Northampton.

Darren Carter had the Cobblers ahead from the penalty spot early on after keeper Tommy Lee fouled Hallam Hope.

But a quickly taken Spireites free-kick let Dan Gardner rifle home an equaliser from a tight angle on his full debut.

Gary Roberts then delightfully chipped the keeper to put the visitors ahead before Armand Gnanduillet's low strike compounded the hosts' misery.

Substitute Gnanduillet's goal from Ian Evatt's pass settled the contest with Northampton pressing for an equaliser, having already come close when Hope's scrambled effort was cleared off the line by Richie Humphreys.

Paul Cook's Chesterfield appeared to cope much better at a damp, wet Sixfields as they inflicted a third straight home defeat on the Cobblers, who are now six points adrift of safety.