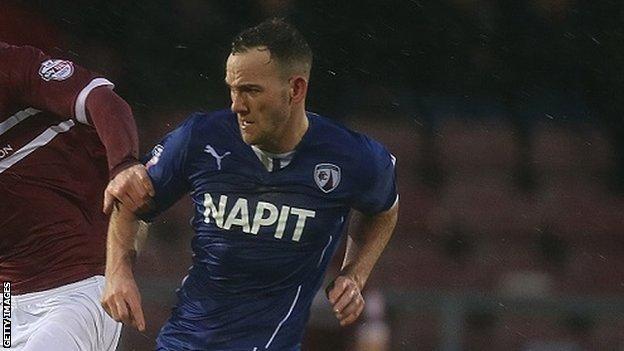 League leaders Chesterfield scored four goals in just seven minutes in the first half to dispose of Cheltenham.

Eoin Doyle made it two when he ran on to Ollie Banks' pass, before Banks curled in a right-foot effort, and Liam Cooper glanced home from a corner.

Byron Harrison scored a second-half consolation for Cheltenham after the visitors failed to clear a corner.

On a difficult pitch the Spireites were in control from the start as they looked to put last Saturday's unexpected defeat at struggling Wycombe behind them.

But few could have predicted the manner in which Paul Cook's side would effectively end the match as a competitive spectacle between the 22nd minute and the 29th.

The visitors improved in the second-half, but Chesterfield goalkeeper Tommy Lee made two outstanding saves to snuff out any prospect of an unlikely comeback, while both Gary Roberts and Sam Togwell failed to take excellent chances to score a fifth goal for the visitors.

"Coming off the back of Saturday's result (1-0 win over Newport) we were optimistic and confident.

"For 20 minutes we were in the game and created two or three chances.

"The first goal's come from a corner and the seven or eight minutes that followed were very influential.

"It's massively disappointing and it's difficult to take."