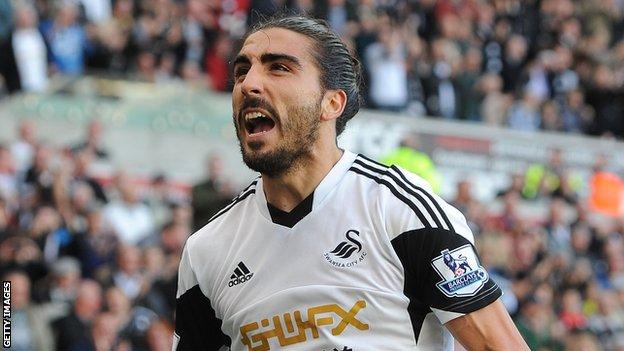 Swansea City have confirmed that police were called to the club's training ground following a row between defenders Chico Flores and Garry Monk.

The incident happened on 17 January, two days before Flores scored an own goal in the home defeat to Tottenham.

The club say it is understood a member of the public phoned the police, who felt that "no action was required".

A spokesman for the Premier League club said: "The matter has been dealt with internally."

According to reports in the Daily Mail, Spaniard Flores had allegedly been seen by a member of the public brandishing a brick, although the club has denied this.

The pressure on the pitch is mounting on the Swans, who have not won in the league since beating Newcastle 3-0 on 4 December, and have lost their last three in a row.

Michael Laudrup's side are now just three points off the bottom in 15th and face fellow strugglers Fulham, West Ham, Cardiff and Stoke in February.

A spokesperson for the club played down the row between Monk and Flores and says the incident is now over.

"Chico Flores and Garry Monk had an exchange of words at the training complex, which is not uncommon between players in training grounds across the country," said the spokesperson.

"But no threats or altercations took place between the players in question."